In the last post, Nolemana, Kukui, Musubi and I were driving along Columbia River Highway. To the side of us was Lake Wallula, which was formed when McNary Dam was built on the mighty Columbia River.

We get closer to Wallula Gap, ‘way up dea. Mauka.

The rock formation up at the gap was really interesting.

And here comes the train!! I was so excited that we could get a really clear photo. This is the train whose terrific engineer blew his horn really loud when I enthusiastically waved at him out my window. Nice touchpoint that. I already showed the close-up shot of the train in Da Mystery Road trip. No need show again, yeah? But I could. If I wanted to. Cuz I’m da luna of this blog. Heh heh. 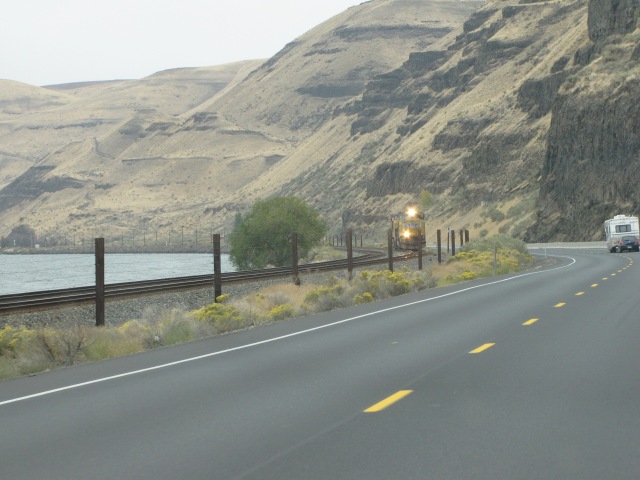 We drive further up the road, still next to the Wallula Lake. …oh. I already said that.

And guess what? We crossed a state border!!! There. Doncha love knowing where we are this time around?

More interesting rock formations; I included this (and all) rocks photos for Kikue, who loves seeing them. Hea u go, sista.

Here’s the rock formation as we pass by Wallula Gap.

Looking back at Wallula Gap and Lake from da road. We pulled over so that I could take this photo.

Kikue, you’re gonna love the next two photos. This is Hat Rock, written by Lewis and Clark in their journals.

Hat Rock is located off U.S. Highway 730, nine miles upstream of Umatilla, Oregon, at Columbia River Mile (RM) 298. Hat Rock is located within Oregon’s Hat Rock State Park. The basalt feature was passed by the Lewis and Clark Expedition on their journey down the Columbia, and today is one of the few remaining sites not under the waters of Lake Wallula, the reservoir behind the McNary Dam. On October 19, 1805, after leaving their camp near Spring Gulch Creek, Captain Clark wrote in his journal:

They even have a State Park nearby. Be sure you folks check out the link. 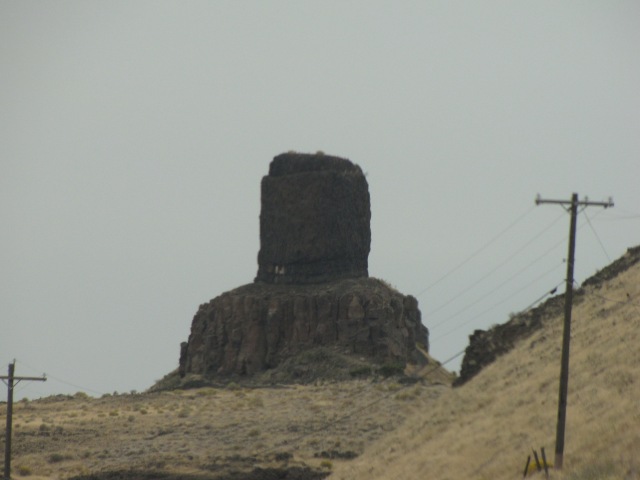 What a fascinating journey we were on! Until now, we had no idea that these places even existed.

These rocks are called Twin Sisters. They were so fascinating that we pulled off the road to see them mo betta.

According to a Native American legend:

“Coyote, the mischievous spirit hero of many native stories, fell in love with three sisters who were building a salmon trap on the river near here. Each night Coyote would destroy their trap, and each day the girls would rebuild it. One morning coyote saw the girls crying and found out that they were starving because they had not been able to catch any fish in their trap. Coyote promised them a working fish trap if they would become his wives. They agreed, and coyote kept his promise; however, over the years he became jealous of them. He changed two of the wives into these basalt pillars and turned the third into a cave downstream. He then became a rock nearby so he could watch over them forever.” [Washington State Chapter, Lewis and Clark Trail Heritage Foundation, April 2000 Newsletter]. 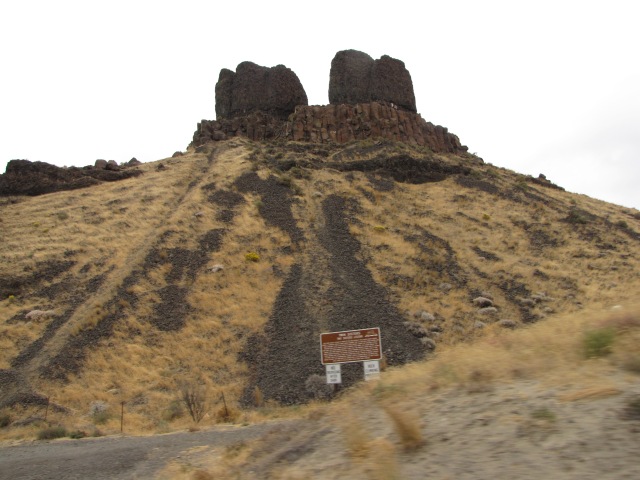 The link is really worth checking out; it has journal entries from several early explorers, including Lewis and Clark, as well as Native American legends.

Back on the road again after the all-too-brief stop. It was starting to rain.

Green in the middle of a really dry area. 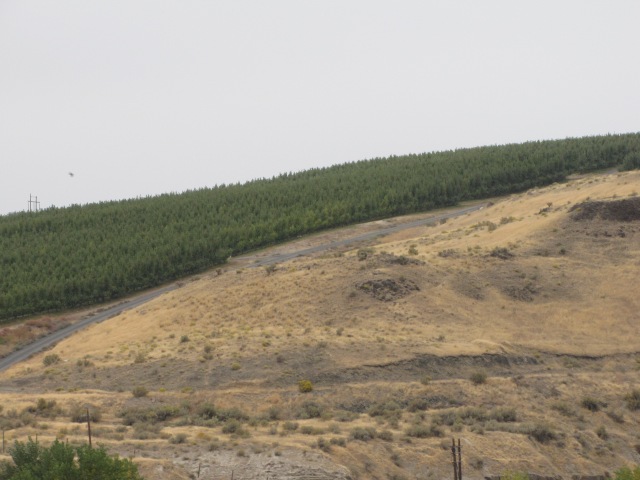 And more pīpī for AFK! 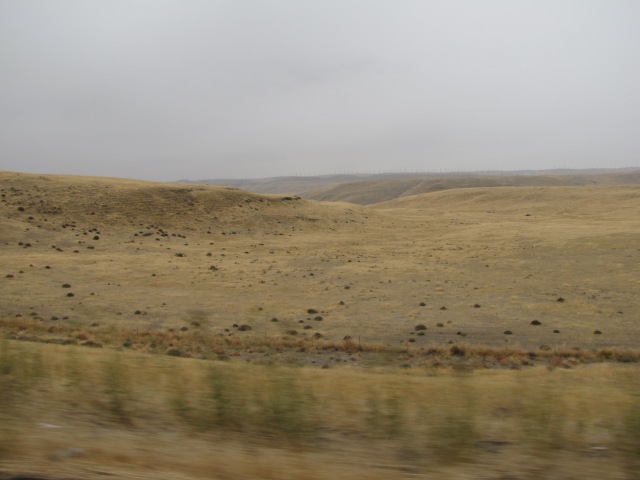 And a cell phone tower in the middle of no where. So hakum u neva wen call me?

This hay was all nicely covered up for winter.

About seven years ago, Nolemana and I explored this area, but today we had no time to stop. It’s an interesting place to visit but stirs up in me a whole lot of sympathy for the Cayuse Indians.

Go here for the complete story. I feel bad for the Whitmans, of course. But I sure get the Indians’ perspective as well because I relate their decimation to what happened to Native Hawaiians. But I won’t digress in that direction now.

Several causes led to the rising Indian resentment. Increasing numbers of emigrants and stories of settlers taking Indian land elsewhere convinced the Cayuse that their way of life was in danger. Their fears grew as measles, brought in 1847 by the emigrants, spread rapidly among the Indians.

The Cayuse had no resistance to the new disease, and within a short time half the tribe died. When Whitman’s medicine helped white children but not theirs, many Cayuse believed that they were being poisoned to make way for the whites.

Back on the road, we passed through Walla Walla, home of fabulous sweet onions. Almost as good as Maui Onions! We didn’t stop, just kept on going, and then drove through the tiny town of Dixie, Washington. It took about fifteen seconds. Even obeying the speed limit. Which I always do. Well, maybe thirty seconds. “Nice little town we’re coming to, wasn’t it?”

Just outside the town, we saw burned fields; field burning is a very common sight around here and other parts of the Pacific Northwest. 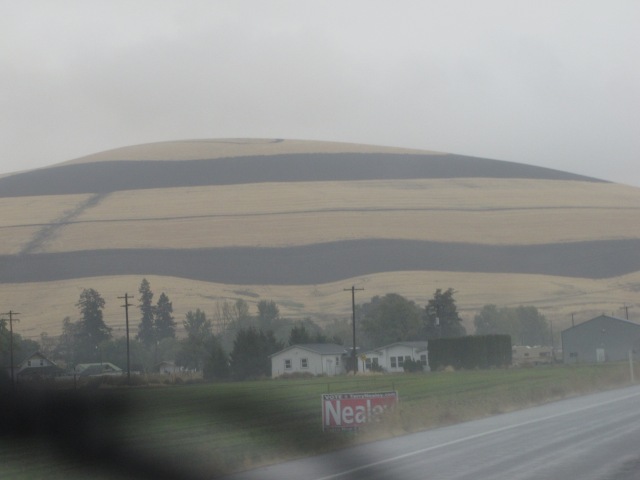 The rain was coming down harder now. But we were really enjoying the advencha of this trip and rain didn’t matter.

This is near Minnick, Washington, on Highway 12, which is near Lewis Peak and Walker Roads. Try wait! When we wen get on Highway 12? I thought we were on Highway 730! Hold on, lemme check. (Jeopardy song playing…..)

Oh. It was at Wallula Gap. Duh. Here’s Minnick. 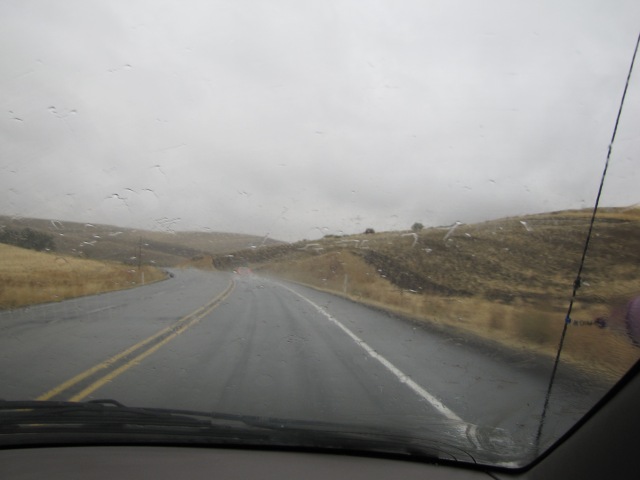 Now we’re heading due North, and come into the small town of Waitsburg, Washington. We stopped here for a break to stretch our legs and to let Kukui out.

This is the kind of town I absolutely love to explore. But we didn’t have time.

Just outside the town.

More field burned hills were all around. It looked like nicely controlled burns.

A neat grain elevator in this hay country. Sorry so blurred; Nolemana took it on the fly. 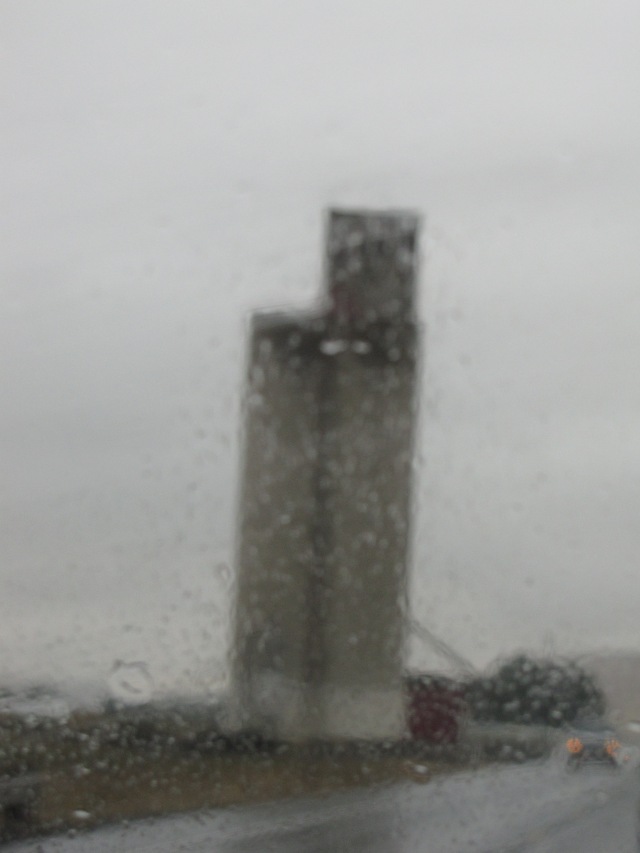 We’re now entering the town of Dayton. I’d heard a lot of wonderful things about the town, and I wished we had time to stop and poke around in the neat shops. 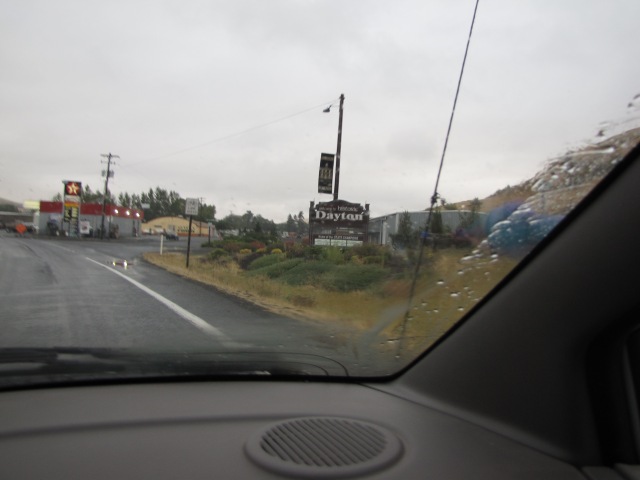 The stores begged to be explored.

Last photo of Dayton before leaving. We really wanted to go through all of the Palouse country before it got dark since this was to be our first time through there, or we would’ve stopped. Now I wish we had anyway.