K’den. On October 3, 2009, Nolemana and I left home for one of the most amazing and fabulous journeys of my life. It was a trip that yielded unbelievable joy, incredible reconnections with my ‘ohana, and sights that took my breath away. We spent seven days away from home and put many, many miles on my van. Ride shotgun with Nolemana and me and enjoy the ride!

By the time we finally got everything packed up and ready, it was later than we’d hoped. We’d had a really busy week, and leaving our little farm for that long meant a lot of preparation. But finally about noon, we hit the road. I set the trip counter to zero. Sorry so hard to see. 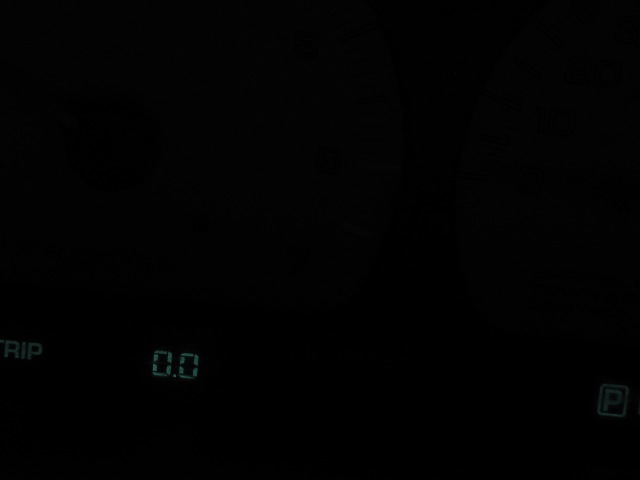 Musubi was ready to go; he was so full of excitement he could hardly stand it. So many miles ahead with his beloved TryLook had him so nutz that he almost fell over.

Titus was out in the pasture, and we waved “aloha ‘oe” to him as we slowly drove down the driveway.

It was kinda scary leaving our critters, but Joan (who boards her horses here) and Julie, my very dear friend, were pitching in to make sure everyone was well taken care of. It’s not easy leaving a parakeet, doves, two cats, two sheep, a pygmy goat, and a llama for a week!

Our Franklinia tree was blooming; it’s a memorial to our beloved Livestock Guardian Dog, Lani, who was our first Maremma. 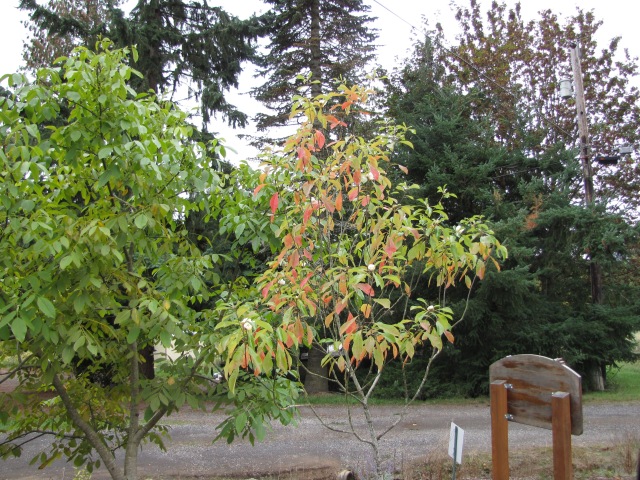 Ricky was at the gate to say “aloha ‘oe” to us. He is such a sweet boy.

Here’s my tattered, battered, wind spinner. I hoped it’d last for our whole trip; it already has a lot of miles on it! Here we are, heading mauka (East) on Interstate 84 in the Columbia River Gorge. 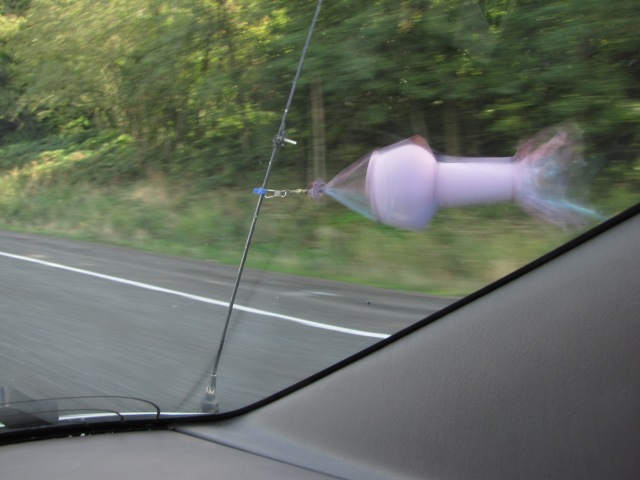 We were really hungry by the time we got to Hood River so we stopped at Subway so that we could keep going while we ate. Musubi decided that he deserved a bite. 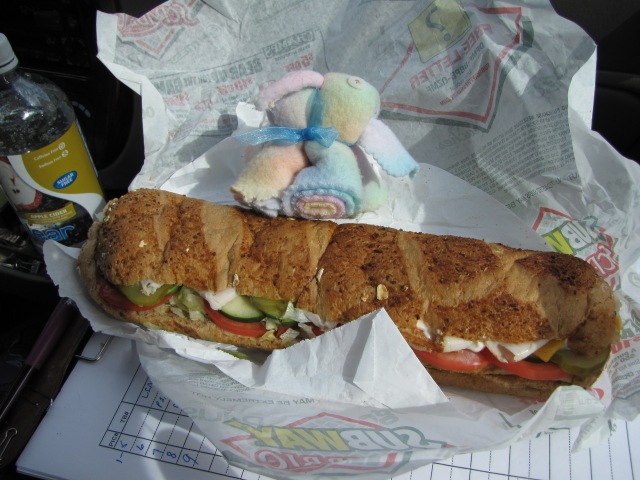 The Columbia River. We travel this highway a lot, and I never fail to be awed by this incredible river.

It’s just amazing how brown and dry it gets after we cross the Cascades. From lush green, waterfalls, and tall Douglas firs, we enter a much more desolate landscape. 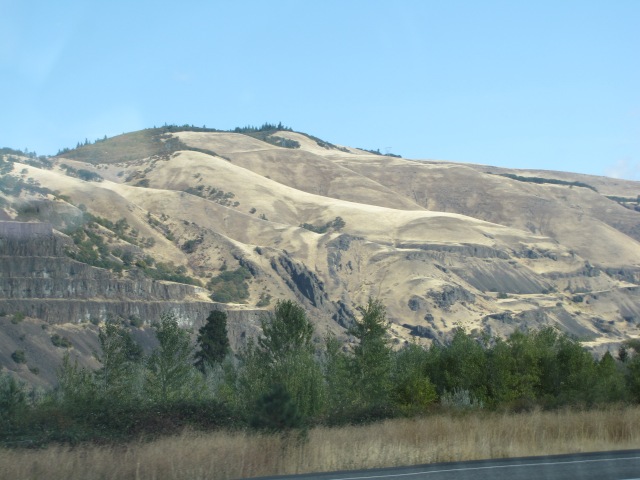 On the makai side of the Cascades, these hills would be covered with trees.

I’d love to take this boat on a river cruise! See the vineyards in the background? Photo for Jenny! This was at Milepost 95. 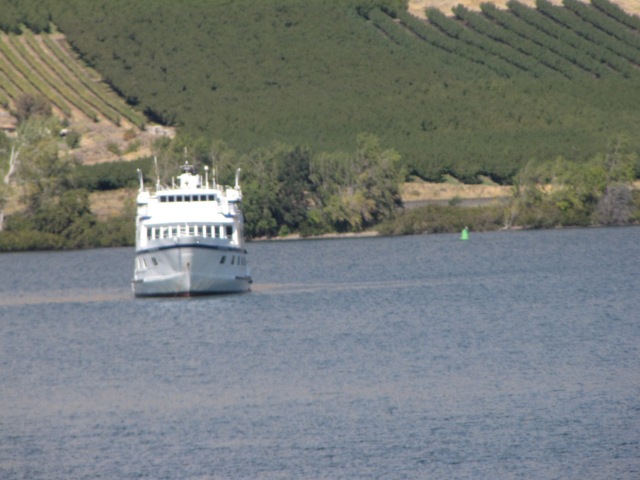 One of the things that we did to keep track of all the ukubillion photos that we knew we’d be taking (though Nolemana had no idea how many!) was to use our appraisal photo sheets to write down as many details as possible about the photos we took. So akamai, yeah?

Interesting rock formation along the highway. This was near Biggs Junction.

This was just a few minutes down the road. 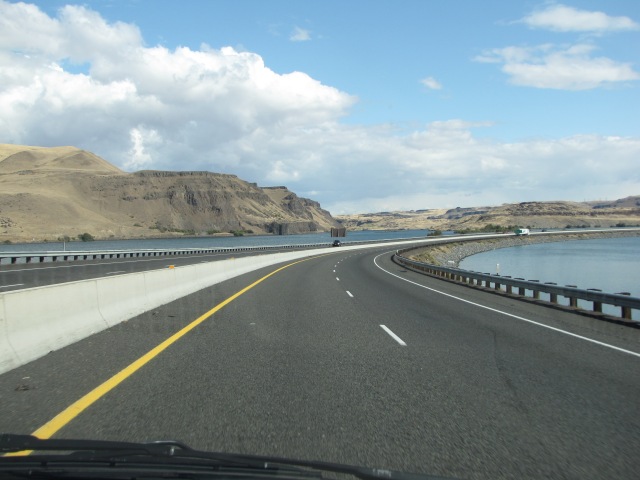 Another train near the same place. If you don’t like trains, you’re reading the wrong blog! 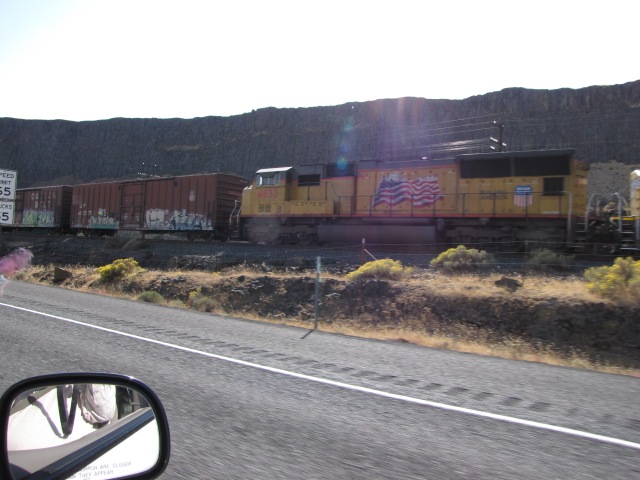 Just four minutes down the road (I like photo timestamps!) we saw another bunch of …excuse, eh? Turbines. Each costing about $20,000. These are at Biggs Junction on the Washington side of the river, not too far from Maryhill. 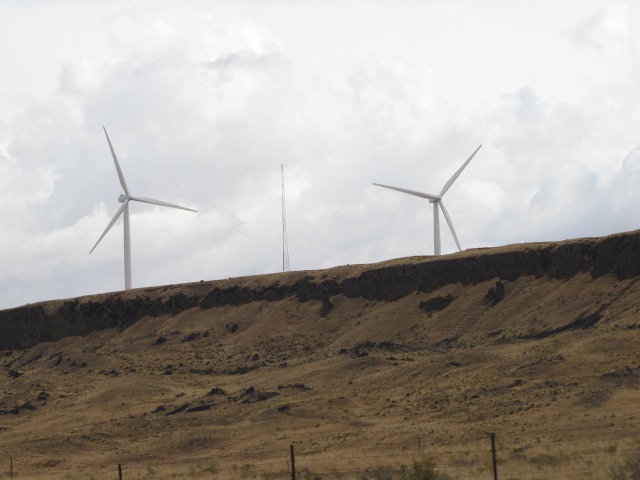 This is Maryhill Art Museum, built by Sam Hill. Yeah, that one. We had a light rain, mixed with clouds and blue sky. We’d come 121 miles and it was 58 degrees outside. Love dem photo sheets!

More turbine photos on the Oregon side of the river. 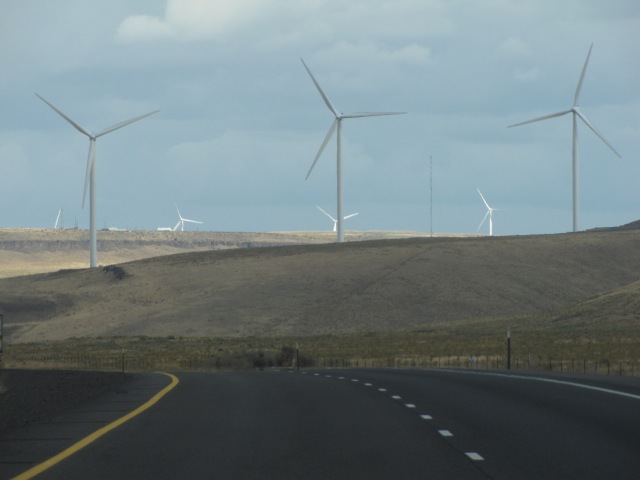 It really is pretty amazing to see so many of them turning in the wind. The Columbia River Gorge is a perfect place for them as it’s a kind of wind tunnel.

Another view of the magnificent river.

We took lots of photos of road signs to help us remember wheredaheck we’d been!

We saw a barge on the river just makai of the Ione turnoff (Highway 74).

Just makai of Boardman, we saw some pīpī and took photos just for AFK, a special friend.

Up ahead, we see one of many tree farms, where fast-growing trees are raised for paper products. 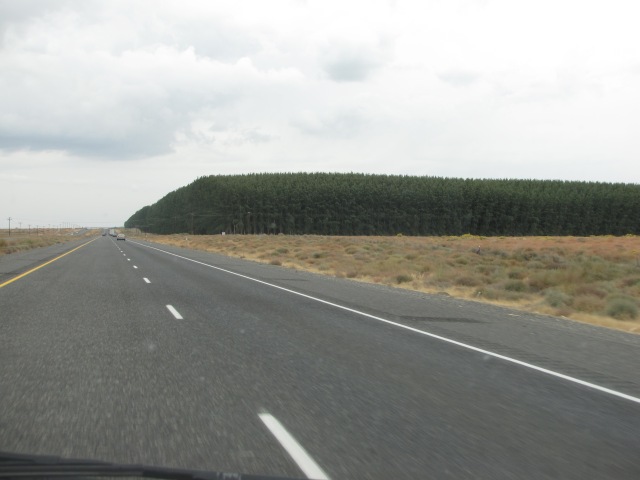 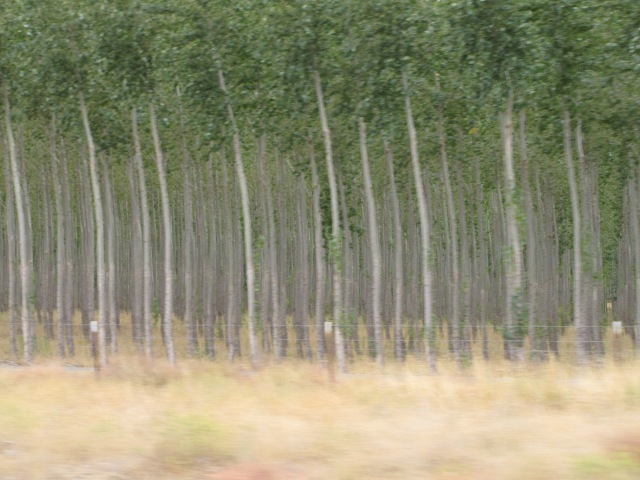 From Interstate 84, we headed North on Highway 82 and ultimately ended up in the little town of McNary along Highway 730, with this interesting “water feature” made completely out of metal. Water must be scarce here… LOL. Gotta make do, yeah?

More pīpī along the road for AFK. The sky is beginning to look kinda stormy. 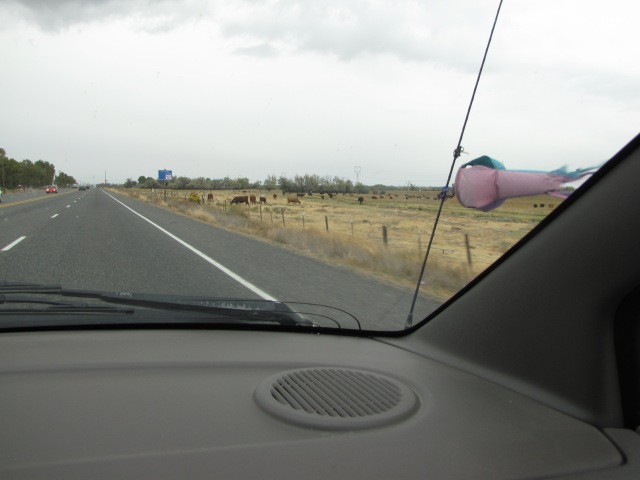 Milepost 193 and plenny other signs too. Evacuation route? Hakum we need that? Oh. Umatilla. Let’s get outa hea! 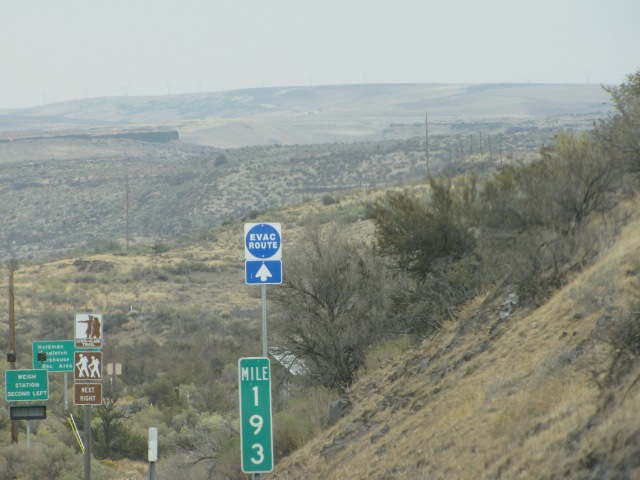 The Umatilla Chemical Depot opened in 1941, to gear up for World War II. The depot’s mission was to store and maintain a variety of military items, from blankets to ammunition. The depot took on its chemical weapons storage mission in 1962. From 1990 to 1994 the facility reorganized in preparation for eventual closure, shipping all conventional ammunition and supplies to other installations. Today, the chemical weapons are the only items still stored at the depot.

We’re now travelling along the Columbia River Highway, right next to the river again. Shortly after this area is where the train engineer honked at me when I waved to him. The water is Lake Wallula, a reservoir formed by McNary Dam on the Columbia River; we’re looking towards Wallula Gap. You can read some entries from Lewis and Clark’s journals about it here. 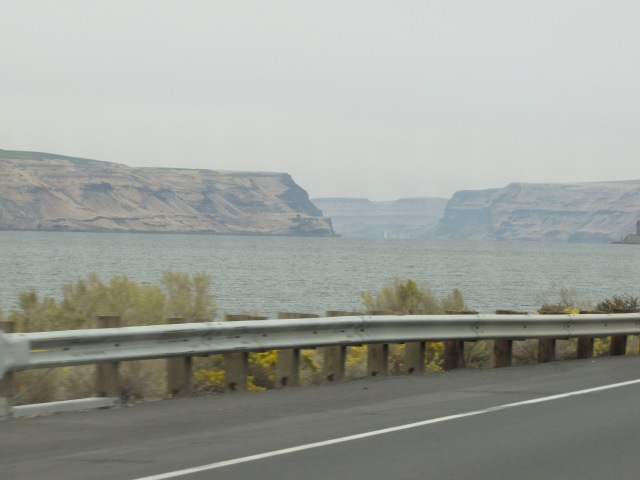