May Quarantine Photos, Chapter One

I’m saving at least ten hours a week not going to the gym. Or going any other place, for that matter. I still go to the vet’s for pōpoki stuffs, like Noelani’s, Kalakoa’s, and Keola’s meds. Or Keola to get his toenails trimmed. Oh goodness…what an ordeal that is! But I found out some interesting information from our vet. Painful info, too. It looks like his former owners, instead of declawing him, opted to have their vet do a tendonjectomy on him, which means that they cut the tendon which allows him to scratch; therefore, his nails grow really long, ultimately getting into the pad of his foot. OMG. And therefore, he can’t keep his nails short. What a cruel thing to do to a cat!

At any rate, Keola absolutely hates the vet; he turns into a holy terror and has to be sedated just for small kine things. But this time he had to have IV sedation, because it would’ve been too painful to get his nails trimmed without it.  I have to make sure his nails get trimmed once a month. If I can’t do it myself he’ll have to go to the vet, which I’m trying to avoid because you know, $$. And I really hate to have him sedated so much. We have a mask (for him, not me…well, you know, I get mask too, but that’s for going anywhere), that will keep him from biting me. Nolemana will have to hold him while I do it, and I do have the right kind of clippers.

Here’s the boy with Noelani after he came home.

I’ve made masks for a friend going through chemo; his wife asked for Hawaiian kine material, and I found some cool ones online.

He especially loved this one because he’s always saying, “Do fish have lips?”

I made banana bread.

Made sourdough starter. This starter is from a thousand-year old original starter named Ivan that was gifted to me by my friend Susie.

And the Western Tanager came back!

And I made sourdough bread. 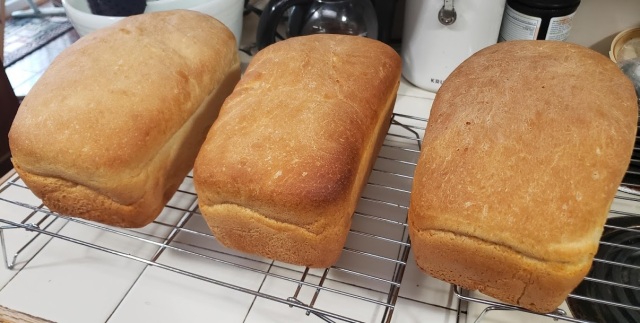 One of our Rhododendrons was about to bloom. 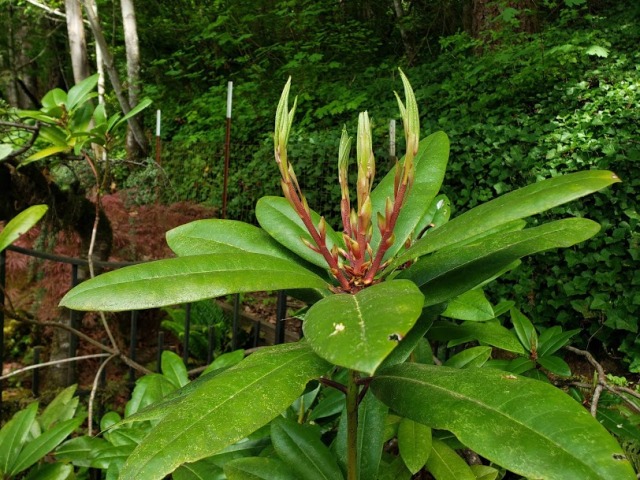 And deer visited our pasture. I was so happy to see them.

I did some plying.

I stopped along Highway 212 to catch this pastoral scene. The mountain was so nani!

Nolemana and Josh, our wonderful helper, burned down some evil Japanese Knotweed. It was here when we first moved here, and is a horribly invasive, unwanted species, and little by little we’ve managed to mostly eradicate it. 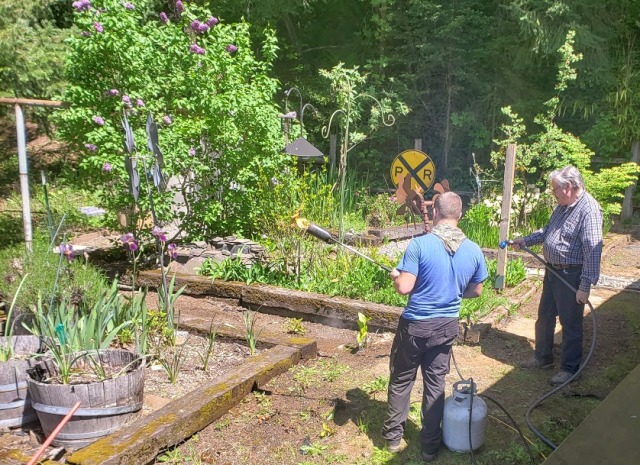 The Nellie Moser Clematis about to bloom.

And this African Violet, which hasn’t bloomed in years and years.

My Clematis is so gorgeous!

And I made sourdough biscuits for the first time in years.

K’den…pau for now. Mahalo for being patient!

5 Responses to May Quarantine Photos, Chapter One