Let’s see…where were we?  I texted Suzette: “Have you gotten to Creston Junction yet?” Her reply: “Passed”.  Rats. I missed them again. I asked if they’d gotten to Sinclair yet, and she said no. They crossed the Continental Divide again and then saw a sign that said, “Blowover risk Wolcott Junction…winds 50+ mph”. Ack!!! They were driving a kind of tall truck, too. Wolcott Junction was one of the places where I thought I might be able to catch them. Because try look what a long view of the highway it is!

(photo used with the kind permission of WYDOT.)

They stopped here at the Flying J for fuel. 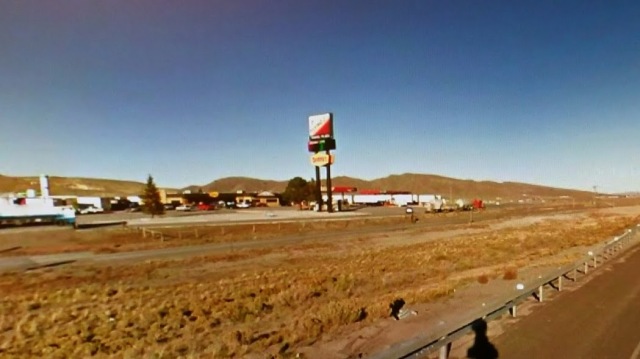 I laughed and told Suzette I sure wasn’t getting much done that day and that this was ‘way more fun than housework. I asked her to let me know when they were almost to Sinclair and she said she would. They were 3 miles from that town, and since Wyoming webcams are better than Idaho ones, I thought I could see them there. She told me that the blowover risk was all the way from Walcott Junction to Laramie! Eek!  So I checked the webcams between those two areas and texted back that there were a lot of semis on the road and that everything looked okay.

This is the Sinclair Refinery, about milepost 221. 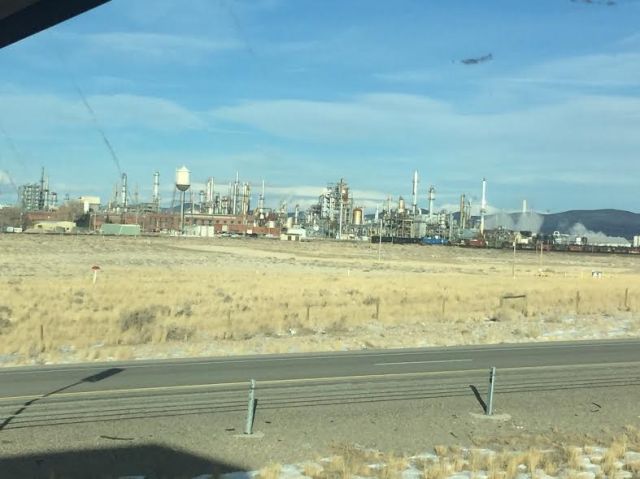 I was waiting right there, hoping that the webcam photo would refresh right as they drove by. But nope. It didn’t, even though Suzette waved as they went by it.  I told her I’d try at Wolcott Junction and she said, “At least we are big and yellow!” Very true. Even now, whenever I see a Penske truck, I think of this road trip.

I watched for yellow. And big.

Suzette sent me a photo of Elk Mountain.

It really is beautiful, if lonely, country.

Then she texted me and said, “Off topic…got Ginny’s (from FatCatKnits) email about all her colorways being available for a week…so tempting.” I’d gotten the same email and how tempting it was, and thus began a fiber/spinning discussion.

That discussion was interrupted by her photos of fabulous lenticular clouds. 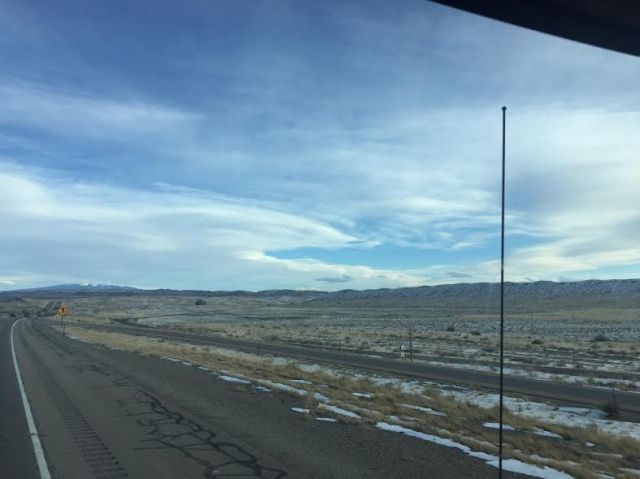 Me: “How did you know I love lenticular clouds!!” 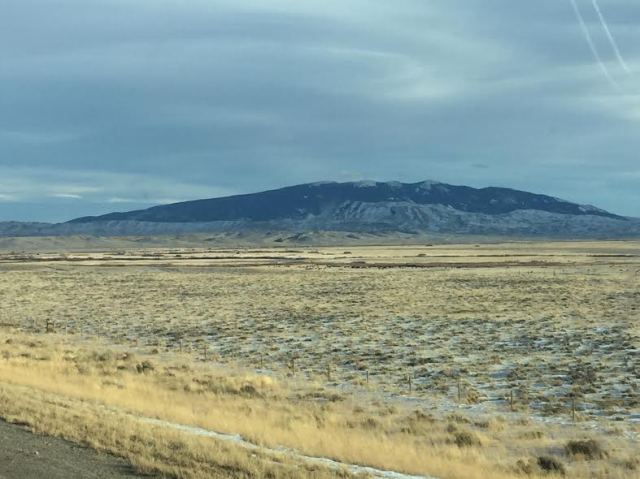 Suzette took a phone call, and I asked where we were now. We were having freezing rain here at home.

They were 90 miles from Cheyenne.

I asked if they were past Laramie yet, but they weren’t, yet. I was going to try and catch them there. Suzette had been on the phone with her daughter, and her daughter’s husband laughed and called me a stalker!  I guess I really was, kinda sorta.

I told her how I was loving taking this road trip with her and she said she loved that I was with her, too. She certainly wasn’t having a boring trip with me along!

It was getting late in the day. Suzette wished the big mirror wasn’t in the way, but I didn’t care.

It began snowing in earnest here, and Nolemana and I needed to go salt the driveway so we could hopefully get out the next day. I told Suzette that I really needed to write a blog post about this whole adventure. (The road trip, not salting the driveway.) She said yes to that and said it’d be okay to use her photos.  Hahahahaha. A single blog post. As if there would be just one. Here I am on Part Six already, and I’m not pau yet!

Taking a break to salt the driveway curve is a good place to end this post. Stay tuned…the adventure will continue.