Eh. I wen forget to add a couple of videos last time. So Iʻm gonna add them here, to give you a feeling for the beautiful countryside we were driving through.

This one was taken just before we got to the tiny town of Dixie, Washington. This is what the Palouse looks like in spring. Nani, yeah?

Hereʻs another one… I was trying to let you folks know what it was like driving through such nani countryside.

Our first stop after leaving Walla Walla was at this Lewis and Clark marker just after we left Pomeroy, Washington. Itʻs just west of Alpowa Summit on US 12, between Pomeroy and Clarkston, Washington.

I happen to love reading about the history of the region, particularly about how it was before haole people came around. So Iʻm going to quote part of this sign for you, quotes from the marker.

“You can see where two timeworn trails once intersected here. The trail descending the hillside crossed the Patáha Creek valley trail, and then continued up the hill northeast (across the highway to your left) eventually leading to the Snake River. The valley trail continued southeast toward the Blue Mountains. These routes were used for thousands of years by American Indians of this region.

On the advice of local tribes, the Lewis and Clark Expedition followed the valley trail as a shortcut during their spring 1806 return journey. From here they followed the trail fork to the Snake River. This overland route shaved many miles off the explorersʻ eastbound travel. Lewis referred to this location as the place where the road leaves the creek and ascends the hills to the plain.

This part of the sign shows where the trail was. We looked up the hillside and could see it. I must admit that I felt kind of overwhelmed to think of the many pairs of feet that had used that trail, ʻway long before we even stopped here. I felt a sense of reverence about it.

We drove further on.

Then we came to Alpowa Summit, which is just before the long downgrade going down into Lewiston.

The Indians knew that this was a great agricultural region long before anyone else did. 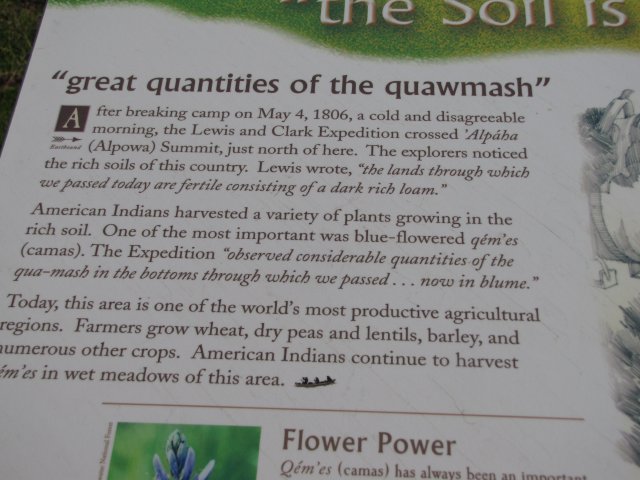 Iʻd like to be here when the qémʻes blooms! Today itʻs called “camas”.

And from the diaries of Lewis and Clark:

These markers are fascinating, and even though time was getting late, we stayed here long enough to read the sign, look for the old trail, and read the marker completely….

…and take this video, which shows the beautiful land around us.

I also felt a great deal of admiration for William Clark and Meriwether Lewis, trekking across the entire United States like they did. I am grateful that they kept journals and bought a copy when we got home so that I could read them at my leisure. 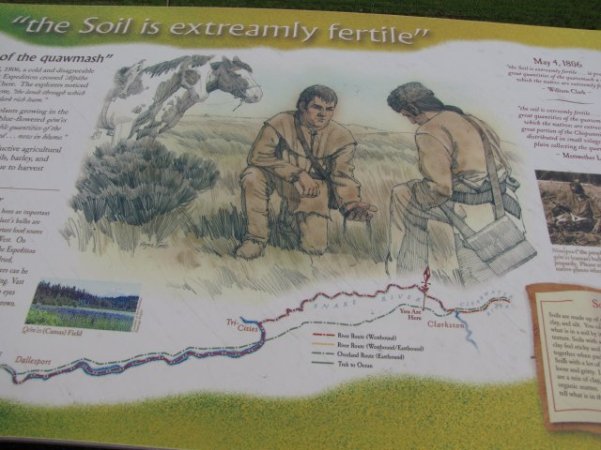 Kʻden, next time you get to drive down the long, long, long, downgrade into Lewiston. Musubi loved it and I think you will too.

Will update again next week. In two days I stay going to da kahakai wit my Gathering ʻohana!