Last night about 6 p.m. Nolemana called me from my office (where I was oblivious to the view from the deck… because I can’t see it from there not because I wasn’t paying attention!) to see what was going on. It was a terrible fire.

I grabbed my camera and took these photos. The fire was at a plant nursery about a mile from us.

Silly me, I forgot I could’ve video’d it with my camera.

It ended up being a 3-alarm fire; fortunately nobody was hurt though we didn’t know it at the time. It started in the nursery’s office, where there were also a bunch of tractors. We don’t know the cause of the fire yet, but the nursery will be back in business on Monday.

I drove by there today but couldn’t see anything from the road.

Last night the wind was really blowing hard, which didn’t help control the flames. In addition, I found out today that the firemen ran out of water (most all the properties around here have private wells), so they had to run their hoses to a hydrant about a quarter mile away, where fortunately, there is public water.

The flames shot a good 100′ into the air, and even from here, it was really scary. 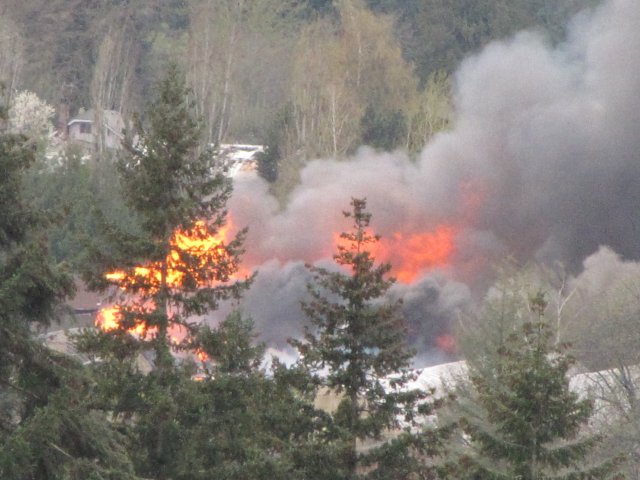 When I went to bed at midnite, there were still flames in the air, though not nearly as high. This morning the flames were out but smoke was rising from the rubble.

I’m thank God nobody was injured. And I thank God for the brave firemen, volunteer and regular, who fought the terrible fire.

3 Responses to Another Blog Interruption