In looking back over my previous posts on this road trip, I realize that while I’ve shown a lot of photos and landmarks etc., I haven’t really talked much about my feelings about this advencha. I would like to change that.

I inherited a large portion of wanderlust from my dad, who loved to discover new places, see new things, and just get on the road and go! After my mom died in July, 2008, I re-established a relationship with her sister-in-law Anna, one of my favorite aunties, who lived in Hawai‘i with my uncle just before and after my parents got married. I knew that Anna would be able to fill me in on a lot of family history, so rather impulsively, I told Nolemana I’d like to make a trip to see her. I was ready for a road trip, especially one to places I’d never been before. It was almost as if I could feel my papa-san’s blood coursing through my veins saying excitedly, “Let’s go! Let’s go already!”

I had a number of conversations with my auntie, and she was as anxious to have us come as I was to go. There were lots of arrangements to be made, and bless Julie’s heart, she was on deck to care for our business needs, feed the cats and birds, and gather the mail, etc. Joan was able to feed Pikake and Puakea in the pasture. We took the laptop so that we’d be able to work on the road should work come in. Which it didn’t, but that was okay. We wouldn’t have had time to do anything anyway!

Little did I know that this trip would end up being the highlight of my whole year. I can hardly describe the excitement I felt everytime we rounded a new curve in the road or saw a town we’d never seen before, or seen sights that I’d previously known nothing about. I’m learning so much about the history of the Pacific Northwest as I’m doing these blog posts, and I’m really enjoying recapturing the sights and sounds of this trip. Thanks for tagging along!

After leaving the Cataldo Mission area, we continued East along I-90.

I’d heard of Wallace, Idaho, but had never been there before. Now we’re almost there! 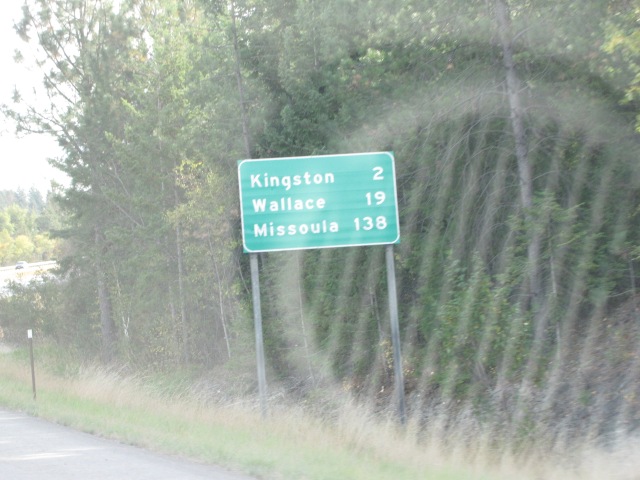 But first, we stopped to get gas in the small town of Kellogg, where we discovered some fabulous sculptures.

I wonder if the snow ever gets so bad that they’re all covered up! Elevation here is 2303′. 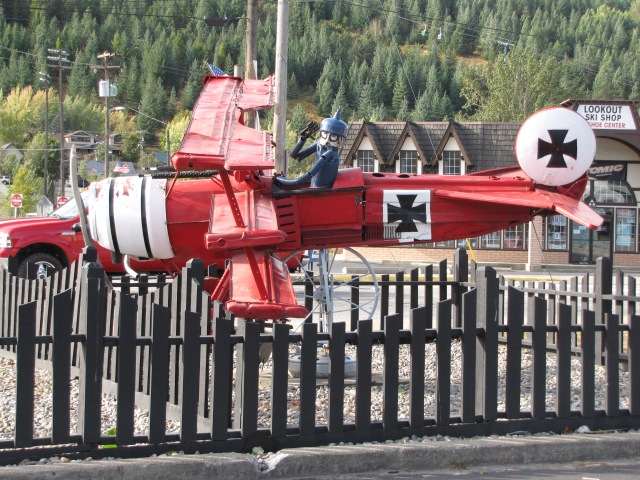 I was delighted to find a train, too. 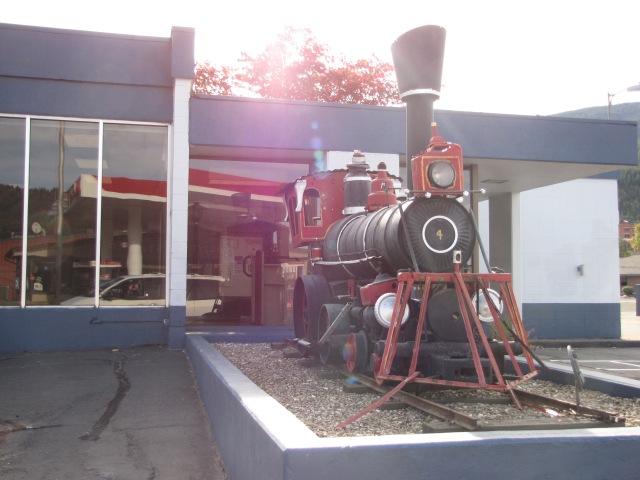 We discovered that there aren’t any Union 76 gas stations in this part of Idaho; they’re all Conoco. But our credit card still worked, so all was well. We were used to Conoco when we lived in Twin Falls.

The outskirts of town. 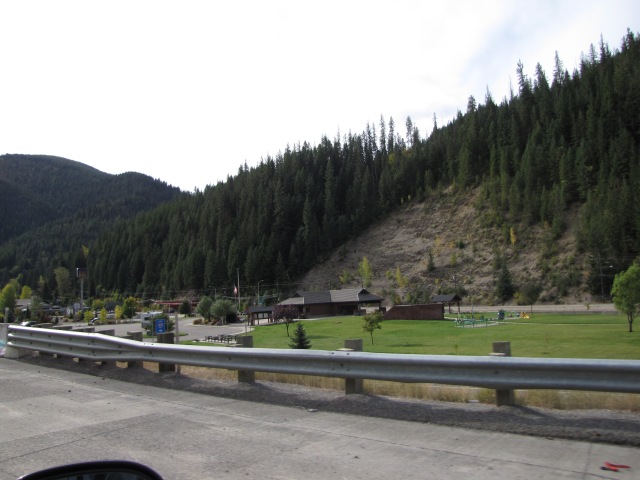 Wallace is only 45 minutes from Coeur D’Alene. I’d forgotten that till I checked my camera’s time stamp. 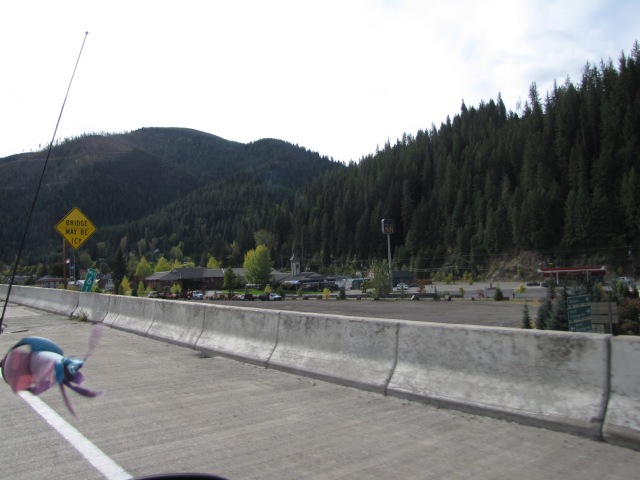 The entire city of Wallace is listed on the National Registry of Historic Places! I didn’t know that till now. Every single downtown building! So when I-90 was built, the government had to build it above the town instead of through it. Good thing! I wish we’d had time to stop, but today was the day I’d get to see my auntie and I had another stop to make first already.

The elevation here is 2730′; next time we get up this way, I definitely want to explore the town. Probably not in winter though.

Doesn’t it look fascinating? I love the way the town is situated right up against the mountains. 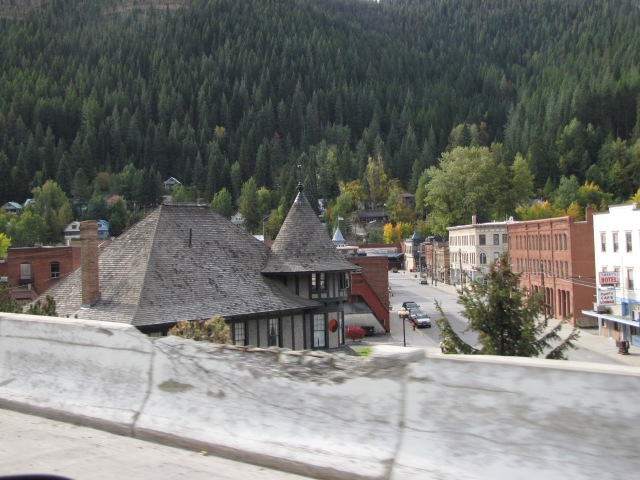 Before we left, I had a feeling that we’d be just a bit early for lots of Fall color, and I was right. I fell in love with aspen trees when we lived in Twin Falls (Idaho) and had been hoping that we’d see tons of them in glorious splendor on this trip, but all we really got were occasional glimpses of early bird ones. I love the way their leaves dance, golden and shimmering, in the sunshine and was sorry we were early; however, we needed to time our trip to get to Auntie’s house before the snow fell. Auntie Anna told me the snow generally starts in her area till about November, which is why we needed to make the trip now. Auntie is 94, and I didn’t want to wait till Spring.

Exit 68 near Gulf Creek (I think that’s what it is. Kinda blurry and I can’t read it on GoogleMaps either.)

Atlas Road overpass just east of Mullan. I love GoogleMaps! Sometimes Nolemana just couldn’t keep up writing down everywhere we were, so I figure it out using the wonderful maps. 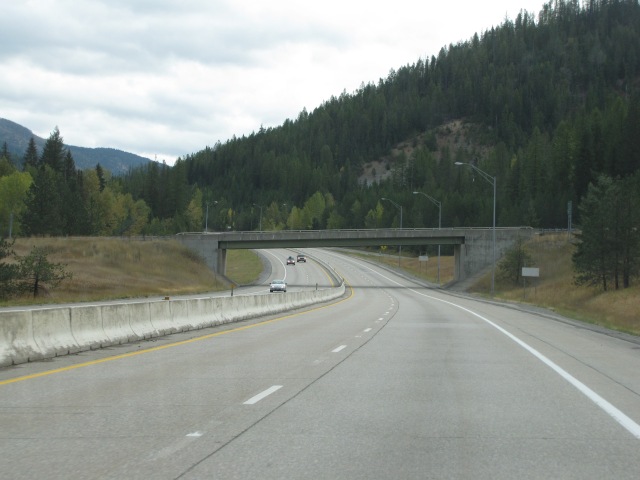 Just past exit 69, we pulled over to see this historical marker.

This marker, at the same place as the one above, tells of a horrendous railway accident here at Willow Creek.

A spectacular avalance , Feb 10, 1903 swept away part of a trestle 300 feet high that let northern pacific railway trains decend from this pass since 1890.

On February 10, 1903, betwen Saltese, Montana, and Wallace, Idaho, one Northern Pacific rotary met the full onslaught of the winter snows. A breakdown had trapped them in the deep snow and the crew worked by hand to dig out the train. Inching their way along the tracks in the middle of the night, they halted the train at the “S” Bridge, an 839 foot sinuous trestle on the Coeur d’ Alene branch about 7 miles from Mullan ID, that offered them respite while the snow accumulated in the gulch.

A pusher engine and a caboose were left in the open while the remainder rested on solid ground. At seven in the morning a massive snowslide raced down the gulch and ripped out a portion of the bridge. The rear engine and the caboose plunged into the gorge, burying the engine in the deep snow while the caboose and its seven sleeping occupants lay shattered on top. A passenger car, with eight aboard, hung off the end of the broken trestle, dangling from the coupler. Although no-one was killed, it took doctors eleven hours to get the shocked and dazed survivors to the hospital at Wallace.

I found this old photo of the disaster. You just never know what you’ll discover on a road trip, do you? That’s one train I’m glad I wasn’t on. Of course, it was long before my time, so what are the chances I woulda been? LOL.

We saw a few more aspen trees in the distance. 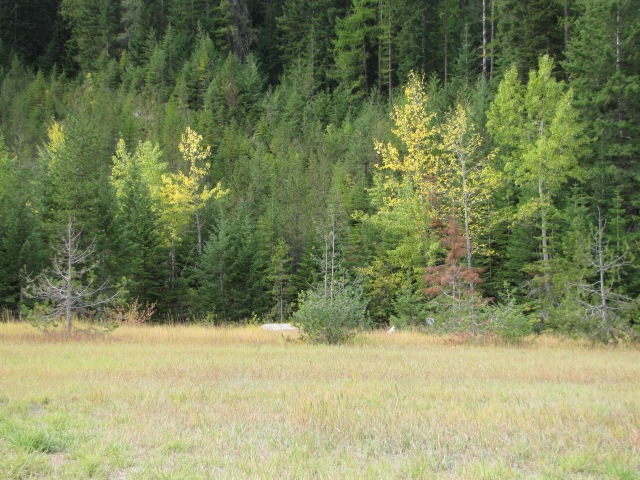 We’re now at 4723′ in elevation, climbing all the while. Around every curve were new vistas, new things to see, and it was so exciting to be travelling in places we’d never been.

Looks like we’re getting ready to go downhill again. And Exit 0: So we’re crossing a border! 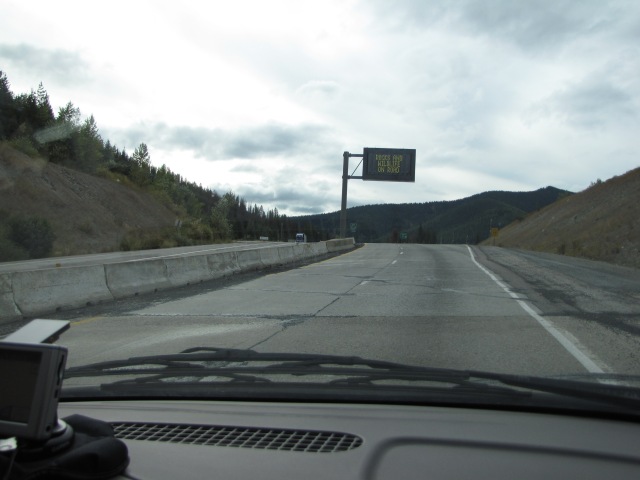 K’den. This is how far we’ve come since leaving Coeur D’Alene. It’s been the most beautiful part of our trip so far, through a lovely lake, majestic, fir-covered mountains, and yes — aspen trees!