K’den.  We go. Musubi loved riding ontop TryLook, our GPS.  His cape, made foa him by Clare (who made Musubi, too!), is hiding our exact location, but I know we are coming to the end of Highway 86. The Crazy Mountains were still in front of us. Musubi, who loves road trips as much as I do, also loves TryLook. He has had quite a time getting used to our new built-in TryLook. Wat?  U think Musubi is not real?  Wrong.

It was good fun riding alongside Flathead Creek.  It meandered along, kinda like we were doing, winding here and there.  We wondered if the fishing was any good here.  Actually, Nolemana wondered.  I’m a catch and release kine girl, but not him.

What a lovely spot!  Crazy Mountains in the background and a winding creek.   I think this area gets about 55″ of snow a year, so I imagine that getting around can be difficult at times. 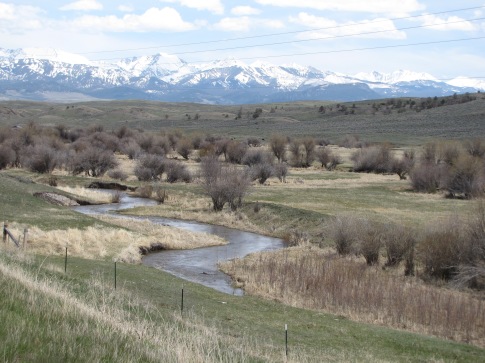 Oh, the mountains!!  Those Crazy Mountains!!

I looked on Google Maps, and saw two interesting names in the Crazies. Loco Mountain and Crazy Peak.  Now I get da PhotoShop action!

We were still following the snake-like Flathead Creek.

And then we came to the Highway 86/89 junction.  If we turned north, we’d end up in Great Falls, Montana. Or Canada. But we had to get back to T and J’s, so we turned right.  But one of these days, we want to drive up to Great Falls.  And Canada.

Looking back the way we’d come.   37 miles we’d driven, through some really spectacular scenery.  I’d love to do the drive again in Fall, or Winter. Or Spring. Or Summer. LOL.

But this is where we were now.  Heading South.

I was kinda tempted to turn around and go back the way we’d come because it had been such a lovely drive. When I was growing up I could see the ocean every single day of my life from our house.  I could see down Mānoa Valley, which is flanked by verdant hills,  all the way to Waikīkī Beach and beyond to the blue Pacific.  So I suppose this longing for wide open skies is in my koko, my blood.  So the wide open skies of Montana call to me even though there is no nearby ocean.

The call of the open highway beckoned.  And we actually saw another car!  It was the first one we’d seen for a long time.

Our companion was still with us. 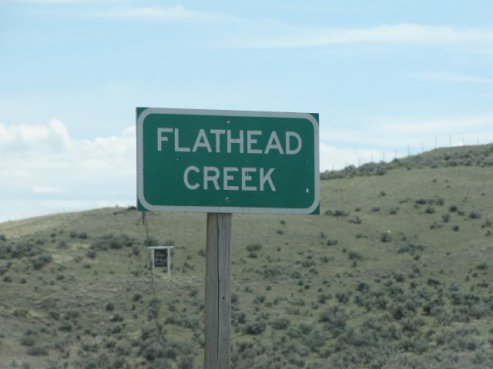 Wow!  Something made us suddenly decide to stop and take a look. It was overlooking the Shields River Valley, with the Crazy Mountains in the background, which was lovely in itself, but something else was there! 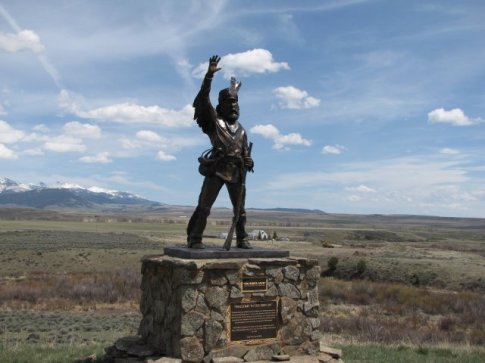 Cool, yeah?  This is Thunder Jack, who represents the mountain men who used to live and travel in this area.  You can read more about him here. An excerpt from that link reads: “Thunder Jack overlooks Shields River which was named by Captain William Clark of the Lewis and Clark Expedition in honor of John Shields, a member of the party. In July of 1806 on their return trip from the Pacific, the expedition camped near the month of the river where it flows into the Yellowstone.” 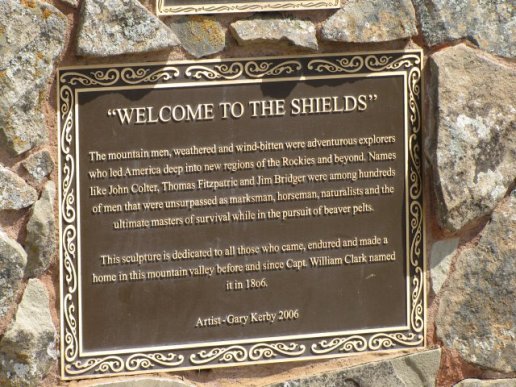 “Welcome to the Shields.”

“The mountain men, weathered and wind-bitten were adventurous explorers who led America deep into the new regions of the Rockies and beyond. Names like John Colter, Thomas Fitzpatric and Jim Bridger were among hundreds of men that were unsurpassed as marksmen, horsemen, naturalists and the ultimate masters of survival while in the pursuit of beaver pelts.

“This sculpture is dedicated to all those who came, endured and made a home in the mountain valley before and since Capt. William Clark named it in 1806.

Fascinating stuff, yeah?  You know, sometimes I wonder where my fascination with the history of the Pacific Northwest comes from. Is it because of the road trips we take? Something draws me to all the historical monuments and signs, but I’ve never stopped to figure out why.

I know that I love to know how things work. There used to be a TV program called “Connections” and I absolutely adored it. James Burke showed how one thing led to another and then to another.  (Wowzie!  Just found the whole series on Amazon!!) Maybe all this is just in my genes… I think I got it from my Papa-san, who was the same way.  Mahalo, Dad!

I shoulda had Nolemana stand next to the statue so that you can see how big it is.  But can u see anyone on da bottom of it?

“Shields River Valley.  This river was named by Capt. Wm. Clark of the Lewis and Clark Expedition in honor of John Shields, a member of the party. Capt. Clark and his men, guided by Sacagawea, the Shoshone woman, camped at the mouth of the river July 15, 1806, while exploring the Yellowstone on their return trip from the coast.

“Jim Bridger, famous trapper, trader, and scout guided emigrant wagon trains from Fort Laramie, Wyoming, to Virginia City, Montana, in the 1860s, crossing hostile Indian country, following the Bozeman Trail. Bridger’s route came up this valley from the Yellowstone, followed up Brackett Creek, crossed the divide west of here to strike Bridger Creek and thence down the latter to the Gallatin Valley.”

This stuff just fascinates me. To think that one of my ancestors traveled the same path we were on…I kinda just stood there and pondered the whole thing.  I stared out over the beautiful valley and how different our means of travel was.  They were on foot and horseback and we were in a car zooming along. Advantages to both, but I bet the party was aware of far more than we were.

Use of logs as posts for the sign was pretty cool. 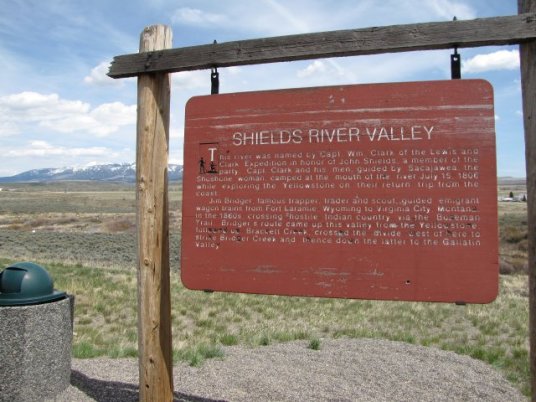 Another view of the river and the valley. The wind was blowing but it was a warm day and we didn’t mind.

Montana is so big, and this is only a very small part of its vastness.

Here’s a close-up of Thunder Jack’s face.  What incredible artistry!

Video of the area.  Not sure hakum da camera was kinda kapakahi.

I could’ve sat here much longer, but we had to get going.  Down the road a bit, we came to the tiny town of Wilsall. 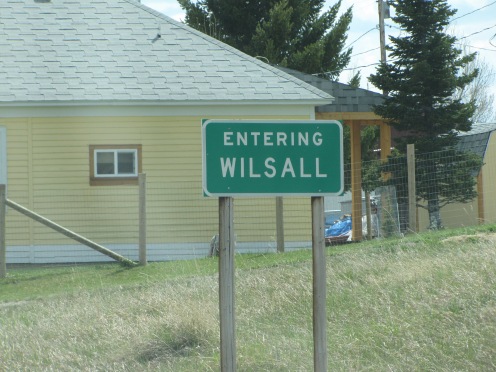 I love old tractors, too. 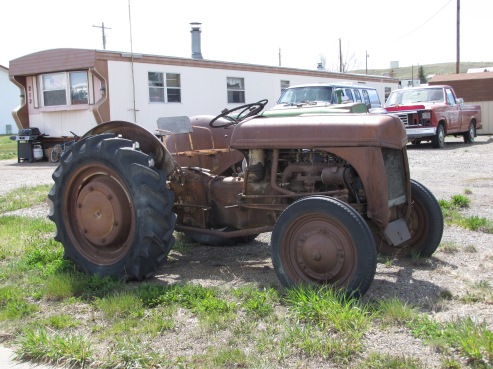 The Crazy Mountains led us onward.  We’re heading south and mauka, but like I’ve said before, mauka is everywhere in Montana.  We can be going mauka and makai at the same time!

To end this part of our amazing trip, I leave you with a photo of this poor old log barn.  It sure has seen better days, but if it could talk, it would have great stories to tell; maybe even Portagee like me! 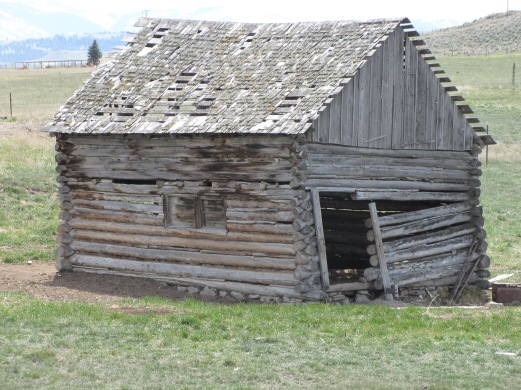