Thanks to Molly (from the last post) I figured out that I could make a GoogleMap showing where we’ve been as a non-aerial map (though I still like those too). This is how far we’ve come so far if I’ve done it right. Give it a second to load.

Chee hoo! That worked! Though you have to zoom out to see the whole thing. You can also hold down your mouse key and view from side to side, or zoom in to get up close. You can also look at the aerial or terrain view! The terrain view is really interesting. Mahalo Molly and Google!

This post is gonna be graphics intensive, so I hope you’re not on dial-up!

I’ll leave you with two more photos of Mammoth Hot Springs. I would’ve taken videos, but we were on an extremely tight budget and I’d only brought one memory card with me. And I wanted to save space on it in order to take all the photos we wanted to take. As it was, we ended up using mine, Nolemana’s small appraisal camera, and his large one and we still almost used up all the space on alla dem!

Next time we go back, and there will be a next time, God willing, we’ll have time to really explore this area.

The hot springs are so big that it’s really hard to capture their magnificence with still shots.

We reluctantly headed out, and were rewarded with some aspen changing color next to the road.

I could sit underneath a stand of aspen for hours, listening to their quaking leaves. 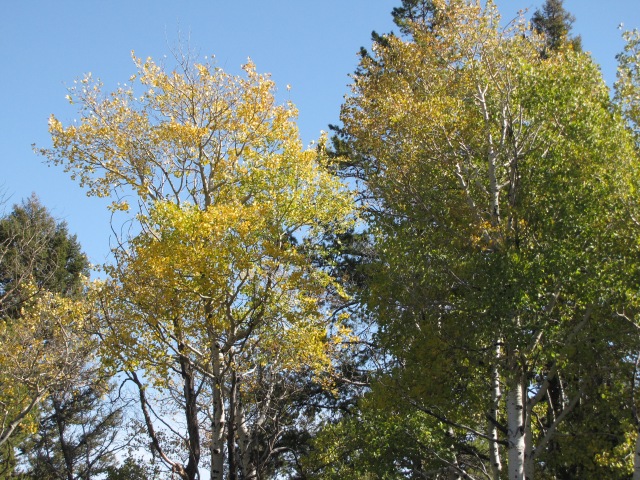 This is along Grand Loop Road, heading south. Kinda junk da photo, but you can still see the snow on the ground. This is right before an unnamed lake where we took a very blurry photo.

Not to mention a blurry photo of aspen along the road. But I’m leaving it in the post because you can still get an idea of what the area looks like. Maybe you folks could squint a little to see it better? Hee hee.

Pretty view along the road; we’re now coming into the Golden Gate area.

See what I mean about blurry? But the lake kinda looks like a heart, so I’m leaving it in. Like “I ♥ Yellowstone”, yeah? 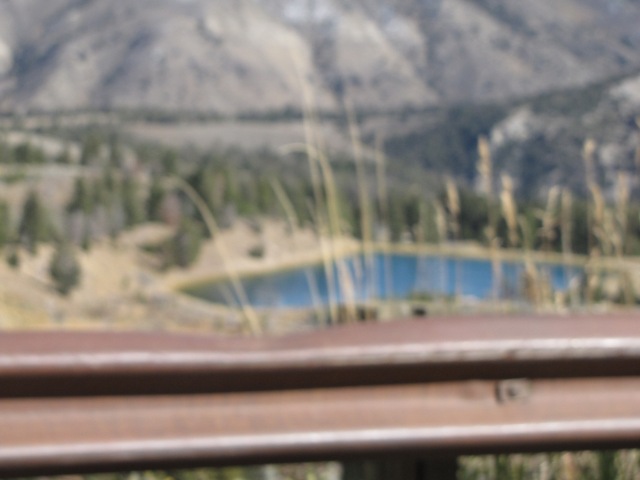 See that gravel road off to the right? That’s the entrance to the Hoodoo Mountains.

It was extremely rocky here. But I don’t know what kind of rock it is.

Kikue, this one’s for you! I think, but let me know if I’m wrong, that these are the Hoodoo Mountains. Next time we’ll bring along some kind of guidebook to tell us.

I wish that I could remember half of what I learned in geology class when I see areas like this.

We’re still climbing, and it’s getting a lot colder.

There’s quite a bit of snow on the ground here.

As we’re driving along, Nolemana is taking so many photos that it’s hard to write down information for every single one. All I can tell you about this one is that we’re still on Grand Loop Road and still climbing. I think we’re still in the Golden Gate area.

Coming out of the Hoodoo area, the Quadrant Mountains are right before us. 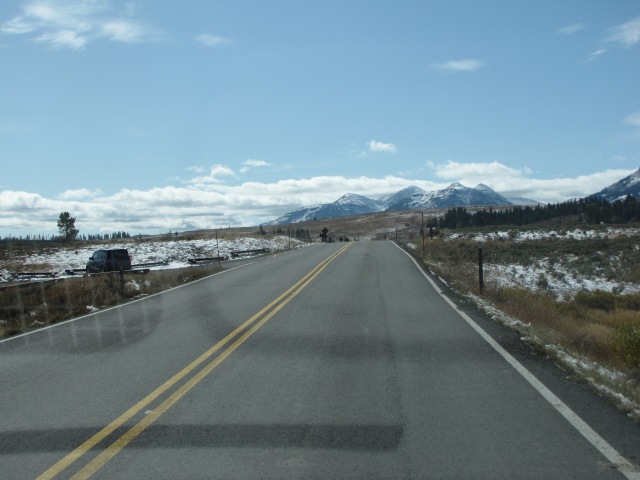 The main reason there are many days between my posts is that I’m constantly searching maps to try and figure out weadaheck we are as well as trying to find out the names of what we’re seeing. I check out GoogleEarth, GoogleMaps, Panoramio, etc., so that I can give you folks some vague idea of what we’re seeing. I didn’t even know the name of the Quadrant Mountains till I did some research! Makes sense. Get four of dem, yeah? I found out that one of the peaks is named Mt Washburn. 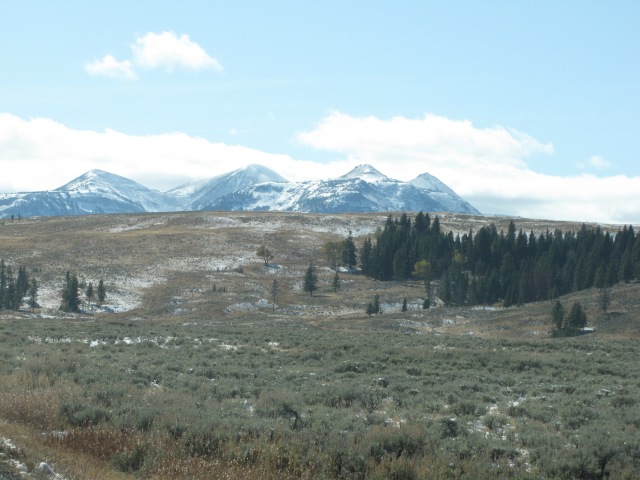 I love learning new stuffs! These are part of the Quadrant Mountains and Electric Peak. 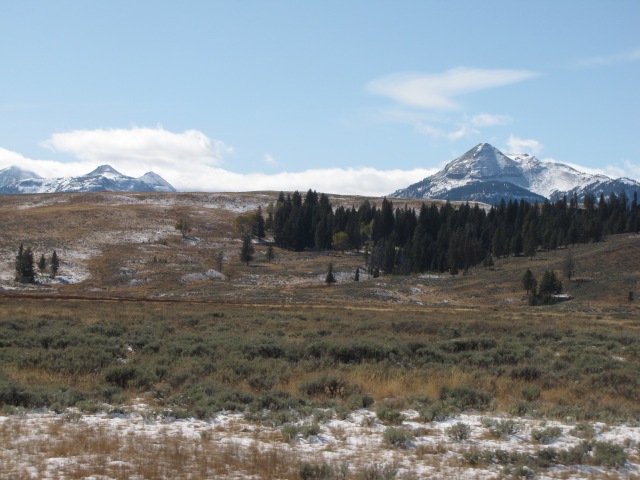 Sheepeater Cliff. Strange name, yeah? But try read these! See how much more you learn from this blog? Heh heh.

Some groups of Shoshone Indians, who adapted to a mountain existence, chose not to acquire the horse. These included the Sheep Eaters, or Tukudika, who used dogs to transport food, hides, and other provisions. The Sheep Eaters lived in many locations in Yellowstone.

Just don’t even get me started on the last paragraph before the footnote. Makes me mad just to read it.

The Yellowstone area has been used by humans for centuries, in fact, for at least 8000 – 10,000 years. This evidence does not all come directly from study of archaeological sites within the boundaries of the park, but includes results from the study of many archaeological sites surrounding the park in Wyoming, Montana and Idaho.

In more recent times, particularly since the horse was introduced by the Spanish, who were centered at Santa Fe, the Blackfeet, Crow and Shoshone-Bannock were the most regular users of the Yellowstone area. Many other tribes, such as the Nez Perce and Flathead, traveled through the area on their way to hunt bison on the Great Plains. At the time of the Lewis and Clark expedition until the 1870’s, the only full time inhabitants of the Yellowstone region and the surrounding mountains were the Sheepeaters (1.), a band who lived in small groups and spoke a Shoshonean language. The Wind River Shoshone would often spend summers in Yellowstone where they would quarry obsidian, fish and hunt and trade with the Sheepeaters.

It is unclear when the Sheepeaters arrived in the Yellowstone area. The earliest reports from hunters and trappers in the area occur about 1810. These reports are framed in the typical ethnocentrism of the era with a report from 1825 stating, “They are miserably poor, own no horses, and are destitute of every convenience to be derived from an intercourse with the whites.”

Their tools were made from the obsidian found locally, including those used to cut wood for constructing their housing. They made no permanent houses, but used caves, skin covered lodges supported by flexible branches and brush covered wickiups. They were skilled in making bows from the horns of the mountain sheep they hunted by heating and shaping the material. These bows, armed with arrows tipped with obsidian points, allowed them to provide meat for their small living group.

Other foods were provided by the women who dug roots and gathered greens and berries found abundantly in summer. They would move almost continuously during the summer, following the food supply as it ripened. In the winter they would occupy semi-permanent camps in a location where game would be abundant. They used snowshoes to give them a mobility and speed advantage over the large game animals which would break through the deep snow and be trapped. They also constructed traps from fallen wood into which they would drive small groups of animals.

The Sheepeaters were noted for the high quality of their tanned hides which had a high trade value, as did the bows they made from the horns of the mountain sheep. These bows took two months to construct and were powerful enough to drive an arrow completely through a buffalo. The few bowls used by the Sheepeaters were made from a soft rock available locally, steatite. While by 1800 the Sheepeaters did have access to some trade goods obtained from the Europeans, their lack of mobility and isolation made these items very rare luxuries.

When Yellowstone became a National Park in 1872, the presence of Indians in the park was viewed as a deterent to the development of the park as a tourist destination. After the Nez Perce War of 1877, in which the fleeing Nez Perce crossed Yellowstone, and the Sheepeater War of 1879 (in Idaho), the Park Superintendent, Colonel P. W. Norris was determined to remove all Indians from the park. Norris succeeded in having the Sheepeaters moved to either the Wind River Shoshone Reservation or to the Fort Hall Shoshone Bannock Reservation in Idaho, ending any Indian presence in Yellowstone.

(1) The Shoshone apparently referred to themselves by the name of the food most important to their livlihood. Other groups were known as Buffalo Eaters, Salmon Eaters, Rabbit Eaters and Pine Nut Eaters.

We’re still heading south on Grand Loop Road. Along the top of the ridge it looks like there had been a fire. 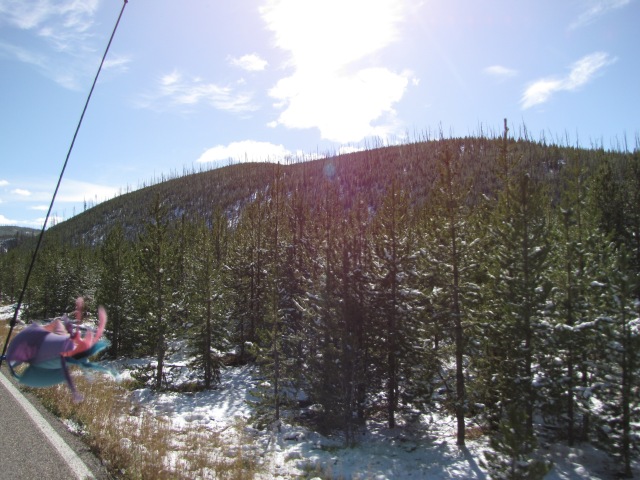 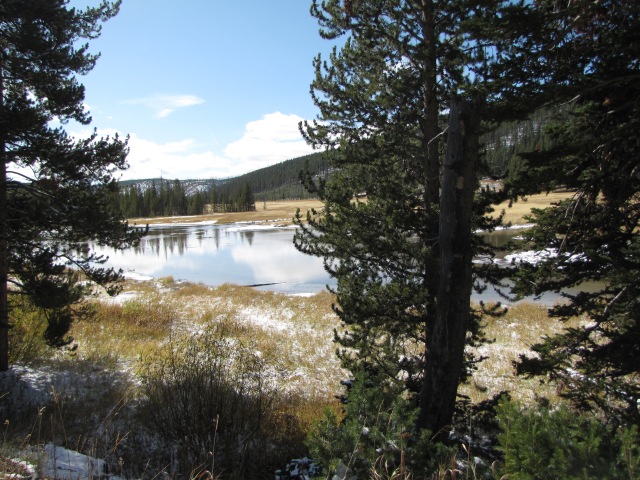 I wonder how cold the water is in the lake! 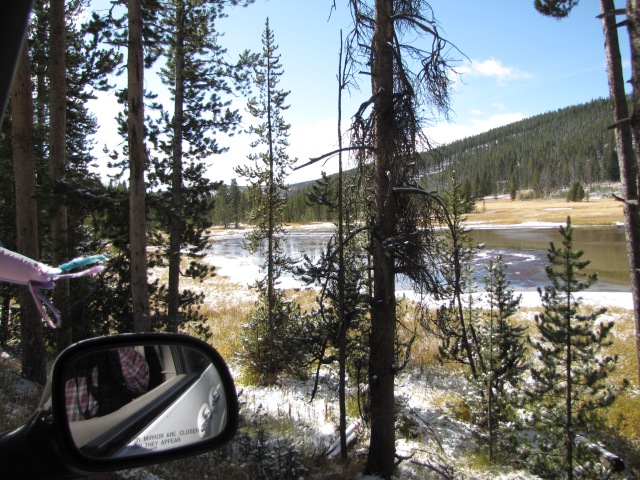 Because Yellowstone is in such a huge geothermal area, there are hot springs everywhere. Even next to a freezing cold lake.

There are two lakes right next to each other; we didn’t get a photo of South Twin Lake but we did get this photo just south of it.

I guess I was right about the fire. 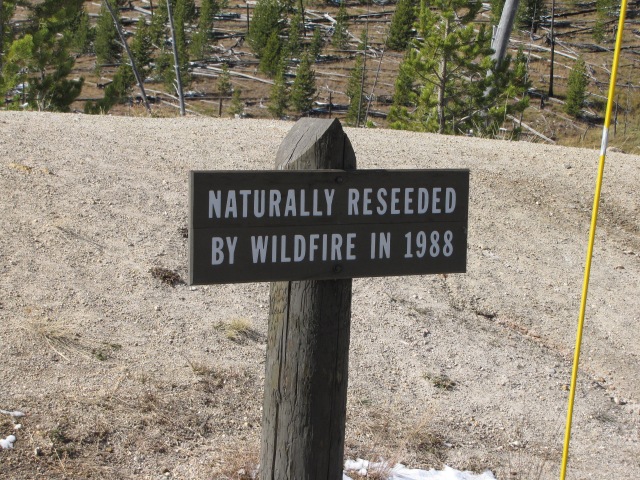 I wouldn’t have wanted to be here then. 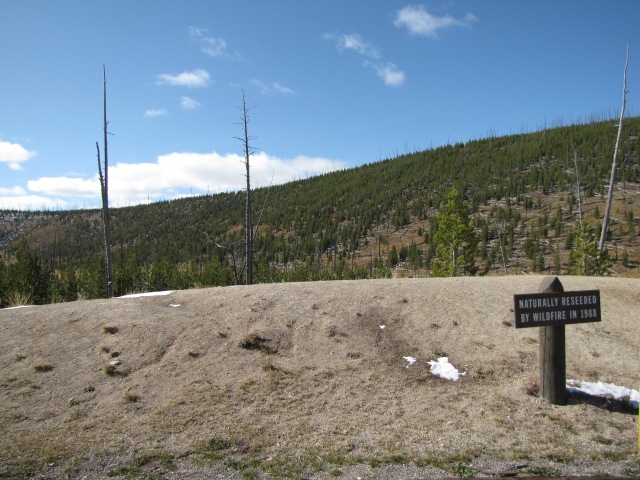 This is near Nymph Lake. It looked like something from outer space. Or The Creeping Unknown. (I remember when, as teenagers, my friend Nancy and I went to see that movie at da King Theater in Honolulu, and how grossed out we were. So grossed out that we had to get milkshakes at the ice cream shop next door to get our minds off of it. Ahahahahaha.) But I digress. 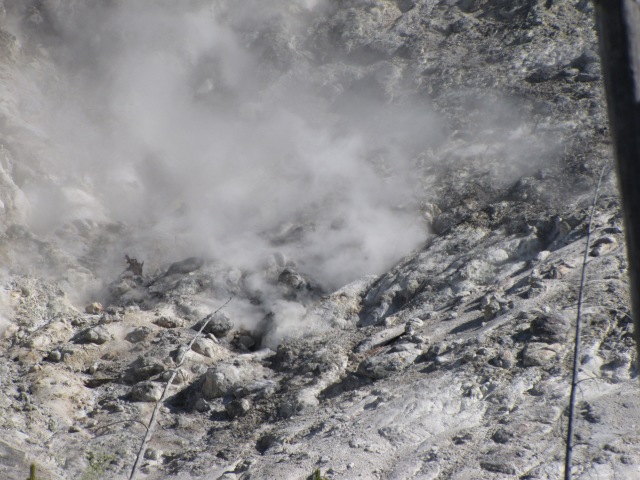 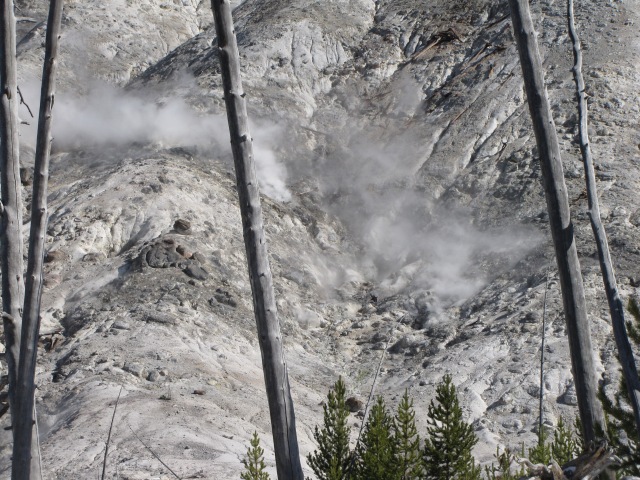 It all reminds me of the volcanoes in Hawai‘i. We are still near Nymph Lake. 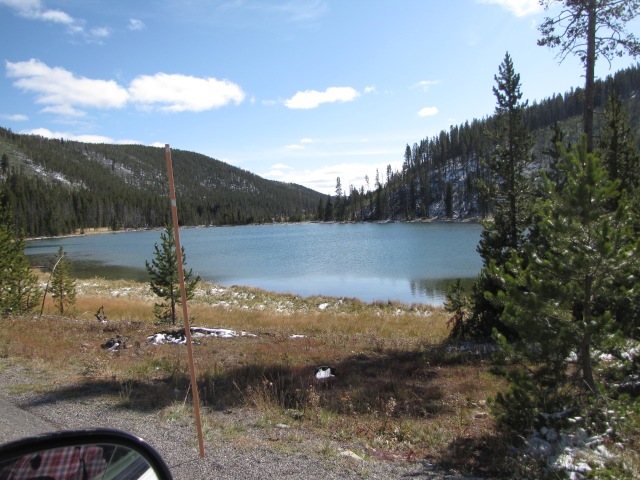 Just about the same view of the lake again. But it was so pretty!!!

I know, I know. Plenny photos of the same lake! But we’d stopped along the road because it was so pretty and wanted to make sure that we had a lot of photos to help us remember. 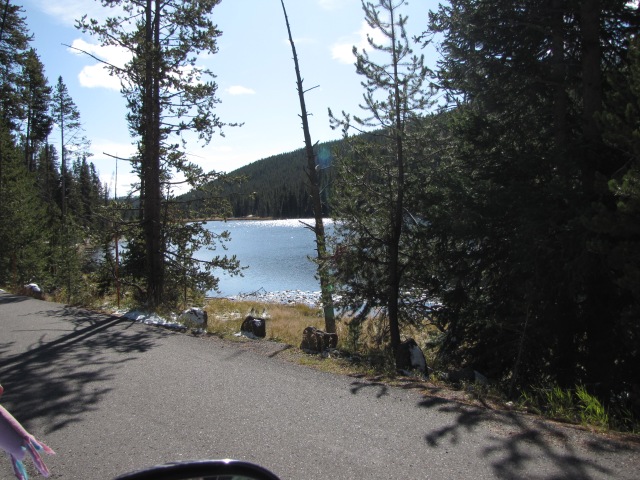 Are you getting bored yet? Ukuplenny photos on this leg of the trip, yeah?

It really was amazing to see the hot steam next to the cold lake. 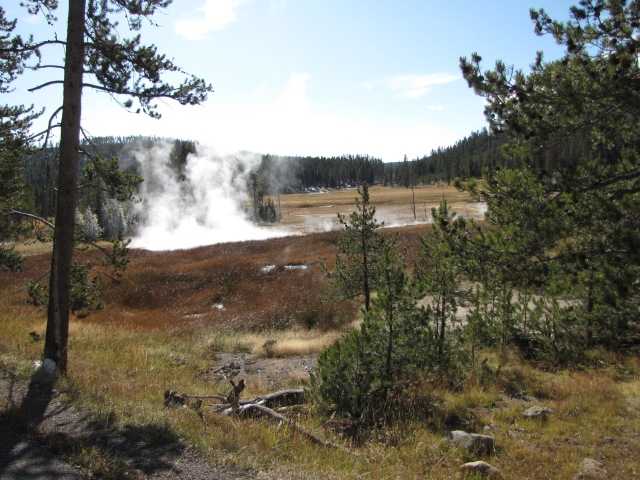 Another view of Nymph Lake.

Okay, I have no idea who this guy is. Seriously. But I’m leaving the photo here because you get an idea of how there are steam vents all over the place here.

Nymph Lake and some guy 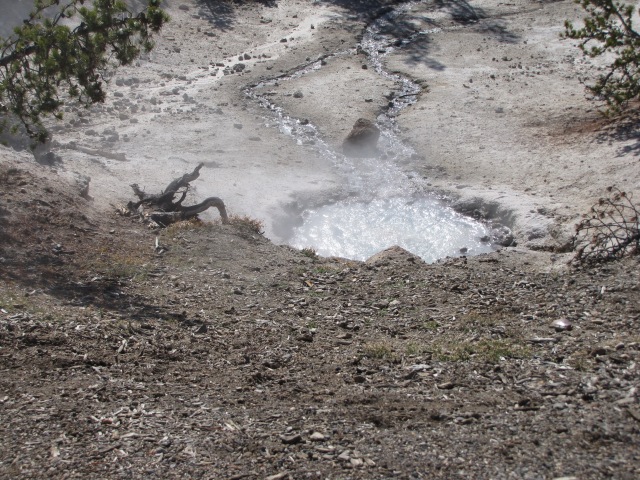 A last view of Nymph Lake and the bubbling cauldrons. 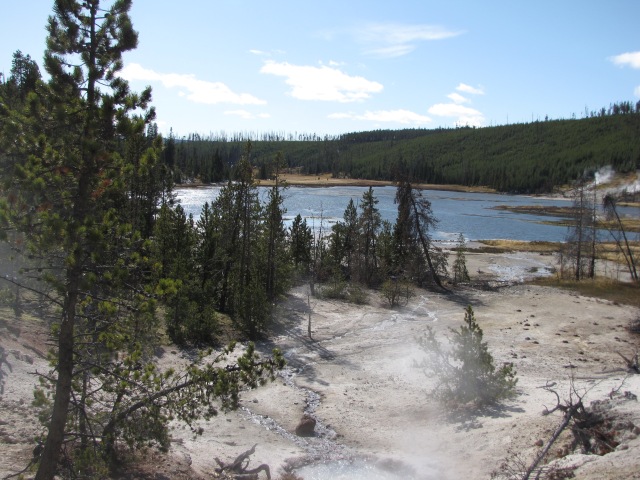 To borrow a phrase from somebody else, this looks like primordial soup! The sulpher smell was pretty overpowering here in North Norris Geyser Basin; it wasn’t a place to linger in. I remember as a kid going to the Big Island and smelling that same “aroma” around Kilauea Volcano. 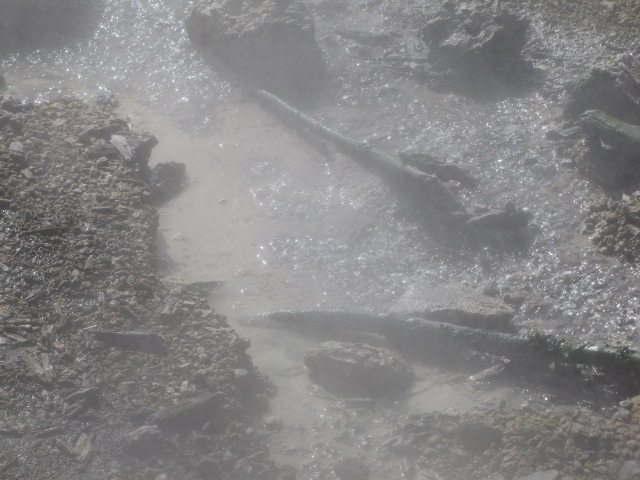 Here’s an aerial shot of where this post has taken us, along with an interactive GoogleMap of more of our trip. It really means a lot to me that whoever you are, you’re tagging along with Nolemana, Kukui, Musubi and me. Stay tuned for Part Twenty, when things really get exciting! 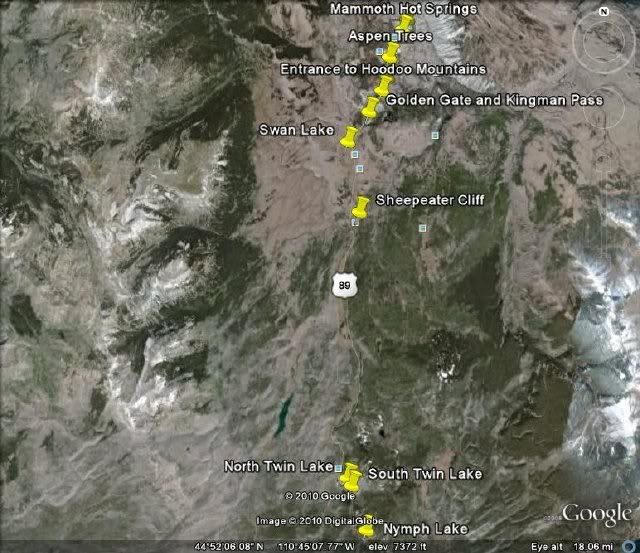