Ho, Part Eleven already and we’re not even to our destination yet! But we were about to see an awesome sight, just a few miles away, in the MacDonald Pass area.

McDonald Pass Recreation area on the way to Helena

We’re not to a spectacular viewpoint yet; we’re going down a very steep grade. Try look all the snow on the ground! And ho da cold!

Compared to how warm it was when we started out, this was cold! 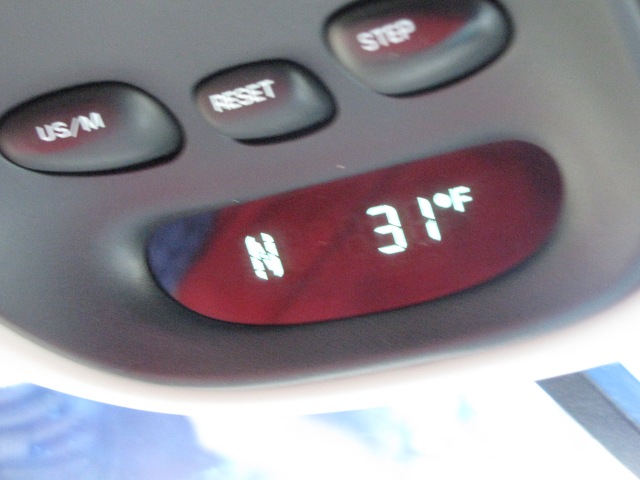 You can imagine how steep the grade was when they suggest trucks only creep along at 25 mph!

Last September, just eight days before we drove through, there was a terrible forest fire in this area. Eight short days! Until we got home, we had no idea what had happened, other than that there had obviously been a fire. Caused by humans. Really sad to see the damage, though we were very glad to have been able to travel along this road. A week earlier and we couldn’t have… 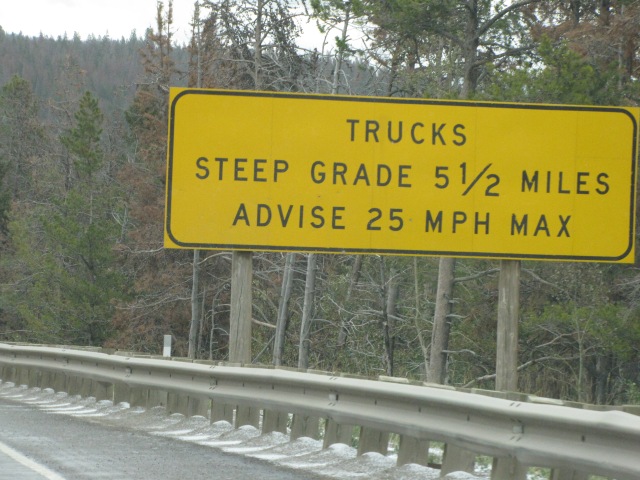 …and we would’ve missed what we saw at the viewpoint. No way were we going to just whiz on by. What an incredible view!

We both got out of the car. Ho da wind!!! And because the temperature was so low, the wind chill was ferocious.

We just feasted our eyes on the magnificent view. 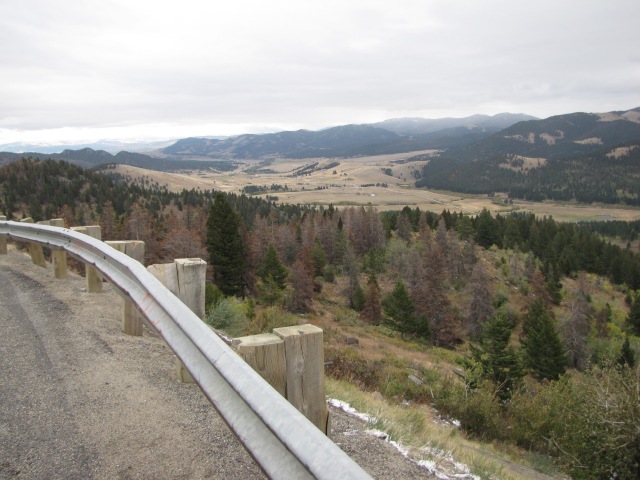 Call me lolo, but I would’ve loved to have been a bird and soared out over the magnificent landscape, swooping down and over all the beauty.

We took lots of photos, but it’s really impossible to capture the vista in still photos. You can see the devastation of the fire in the burned trees below us. 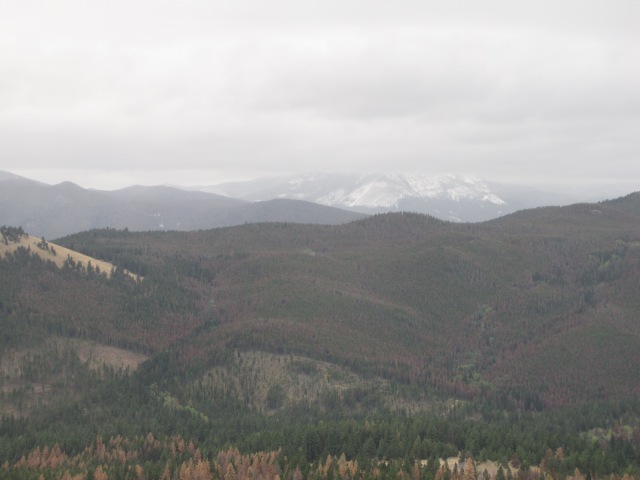 I wanted to ride horses down there with Kikue! 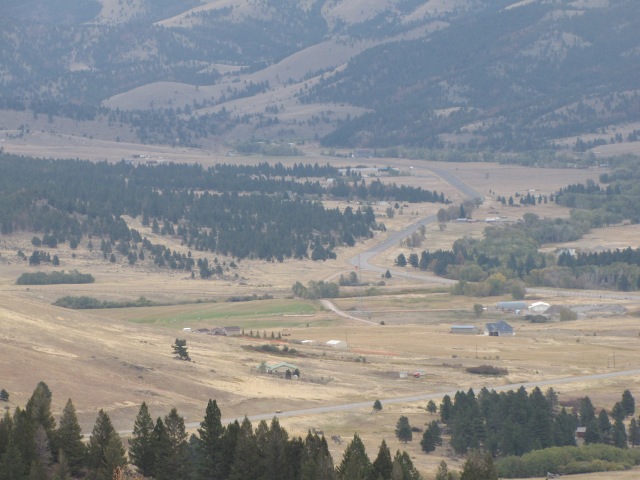 It was so cold that we couldn’t stand out there very long. This is the last still photo that we took.

However, that’s not all. We did take a short video! In it, you can hear how hard the wind was blowing as Nolemana turned the camera towards the east. I wish it was longer, but by now we were just freezing!

Milepost 30 after leaving the viewpoint. 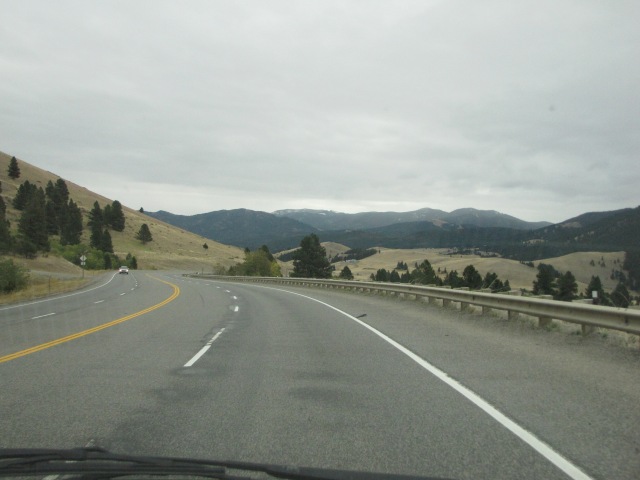 Interesting, yeah? Two different speed limits. It must be because of the winding road maybe.

Now we get to the stop I was telling you about before. And a fascinating one it was. Last year at Oregon Flock and Fiber Festival I met a really nice wahine named Patti, from Montana, who was there as a vendor. We got to talking, and I told her that we were heading up to Montana in just a couple of weeks. She invited us to stop by her place in West Helena to see her shop; she even gave me, a perfect stranger, her cell phone number so that I’d be able to call when we got close. It meant going a bit out of our way on the way to Auntie’s place, but…fiber! And I figured if we didn’t stay too long we could still make it on time. Anyway, at 70-75 mph most of the time, we were making good time.

I called Patti (I’d already programmed her address into TryLook), and she came out and opened the gate for us. She was opening the shop just for us! I wanted to get some Montana yarn and fiber (to spin), but wasn’t prepared for the whole adventure!

Patti’s shop is located in an old country church, which was moved there to her property. Which is an interesting combination with Patti’s house, which I’ll tell you about in a minute.

Inside the shop. Be still my heart! Fiber overload! Sensory overload!

I can’t breathe! I was in the middle of an ‘ānuenue! Un arco iris! A rainbow!

And there’s the Montana yarn!

Patti also is the lucky owner of a Magnus Drudik spinning wheel; I have wanted one for years! What a work of art. The waiting list has been years, but fortunate owners have their choice of wood. At least they used to. I don’t know if they’re even still being made. My dream would have been to have one made of koa. For ukubillion dollars, too. Thousands. Which is why I don’t own one. Heh heh. 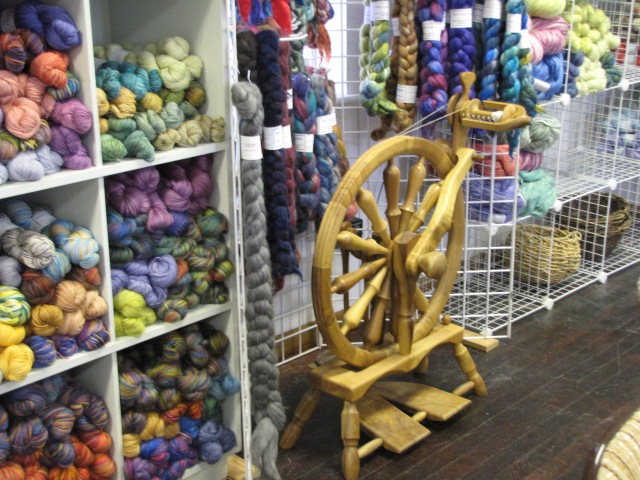 Next to the church/shop were some old steam bath rooms.

This is Patti’s house.

It’s on the Historic Registry. I hope you can read this. Move up close! 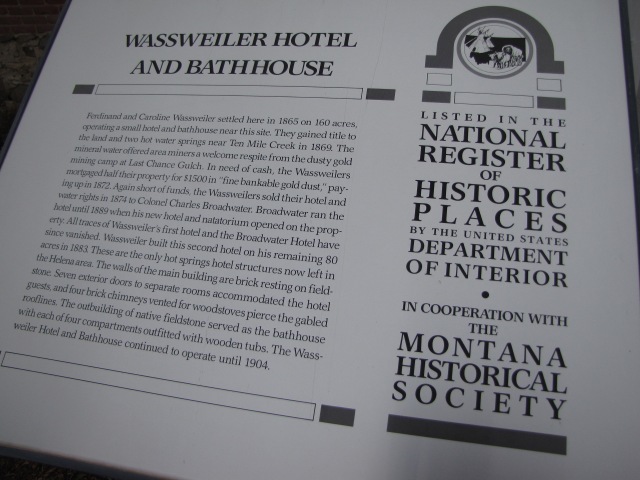 There is something very, very unique about Patti’s residence. But you can’t tell from the outside, and the historic registry information doesn’t tell you this. But it used to be a brothel! Yes. True. Today it looks like a regular dwelling inside, but there are some interesting features to it. Patti gave me permission to take the interior photos.

This is part of Patti’s studio; signs of a true artist with all her equipment. 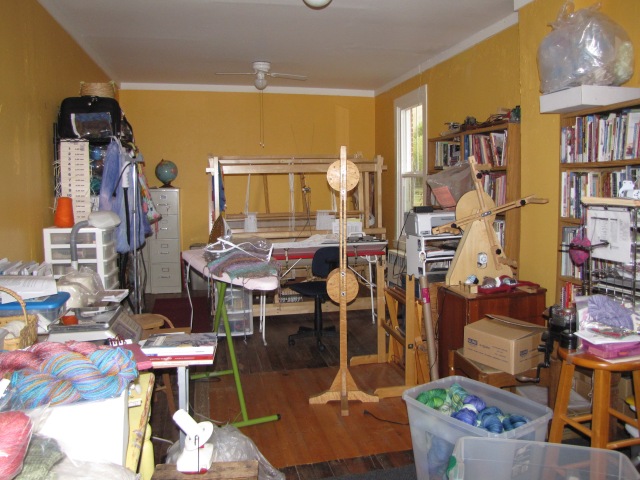 Another room in the old brothel. Notice the door. I’ll tell you about that, too.

The dining room. Notice the door. 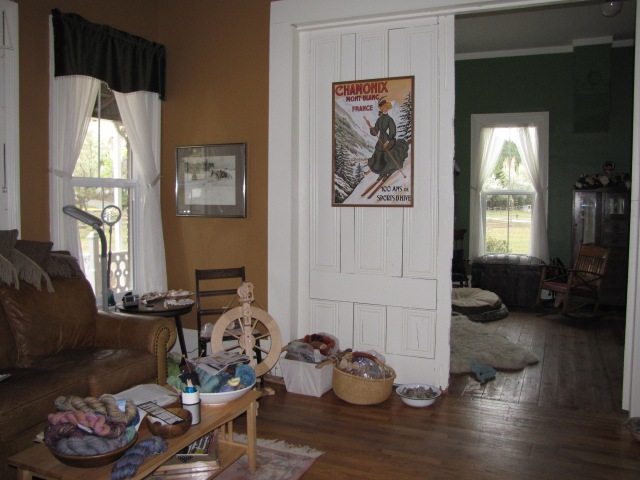 The handle of the bathroom door is only a couple of feet from the floor! Patti didn’t know why it was like this.

Now, about the doors. There were exterior doors from just about every room of the building! Patti is quite sure that the reason for that is so that the politicians, well-known men, “high, upstanding citizens”, could make their entrances and exits to their ladies of choice without anyone else knowing they were there. Heh heh.

There’s even an exterior door from the bathroom! 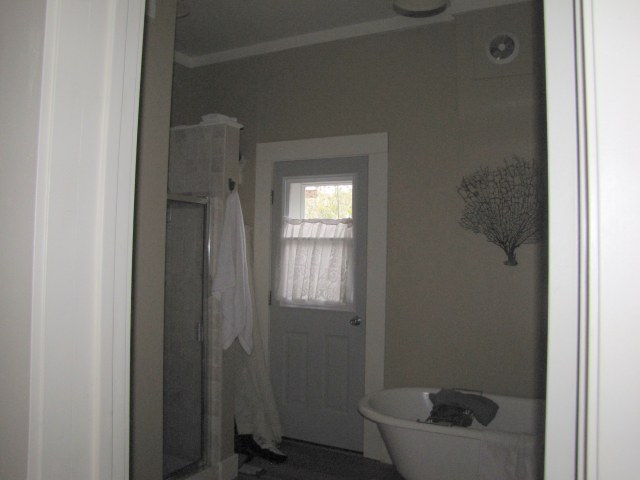 Here’s a photo of the bath houses in relation to the church/shop.

I took another fast run through the shop; I got some lovely roving to spin, picked up my Montana Targhee yarn, and wished I could stayed longer. As I walked out the door I checked the clock and was totally dismayed! I’d thought it was 2 p.m., but it was 3 p.m.!! Oh no! I’d forgotten to change my watch from Pacific time! And now we were going to be late to Auntie’s!! Quick hugs to Patti along with many thanks for her hospitality, and off we went.

We drove through Helena and saw this beautiful building on our way out of town. It’s Carroll College. Mahalo, Patti for identifying it for me! 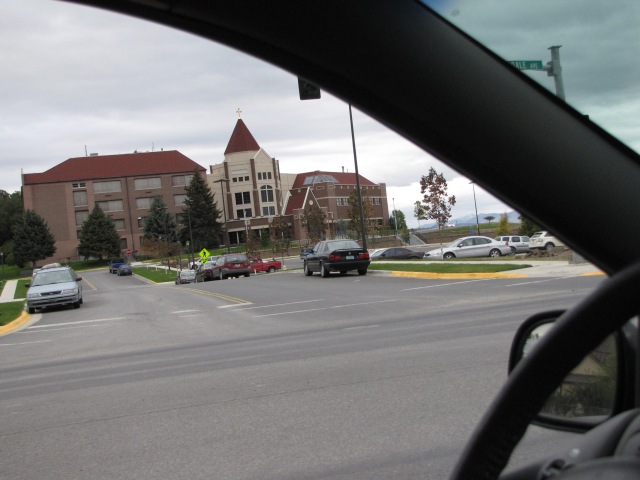 Man, we needed to hustle! We saw a train on Highway 12 heading south.

And here’s where we traveled on this leg of the journey.

That’s it for now… I’ll have more great photos for you next time as we zoomed along the highway. Next time, we get to Auntie’s!!