My daughter had longingly looked at the picture of this poncho, and said she’d love to have me knit it for her. This was months ago. I didn’t get it done for Christmas, so I hoped she’d forgotten about it so that I could really surprise her on her birthday in March.

This is what the poncho looks like, made with some fairly difficult to work with yarn:

I began knitting it several weeks ago; the yarn and I were not on friendly terms. It had a mind of its own and our relationship struggled as I valiantly tried to knit it into a semblance of what it should look like. A couple of times I dropped stitches but managed to get everything back and looking as it was supposed to.

Then, last Tuesday night, to my absolute horror, when I was only about 12 rows from being pau, I somehow dropped around 12 stitches! The mistake was not fixable. I had to frog (rippit…rippit… rippit) the entire poncho. I was devastated and wept bitter tears about it. There was now no way I could get it finished in time for my daughter’s hau‘oli lā hānau.

To make matters worse, the last half of the poncho ended up in a tangled snarl:

A special friend of mine helped me by unsnarling the mess. It took her several hours! Then I took a couple of days off from this challenging poncho. I explained to my daughter that her present would be late (she was very understanding). Then imua! I have begun again, and will have it pau within the next few weeks for her.

This time I hope the yarn and I will have resolved our differences and can work together to create the poncho that it is meant to be. 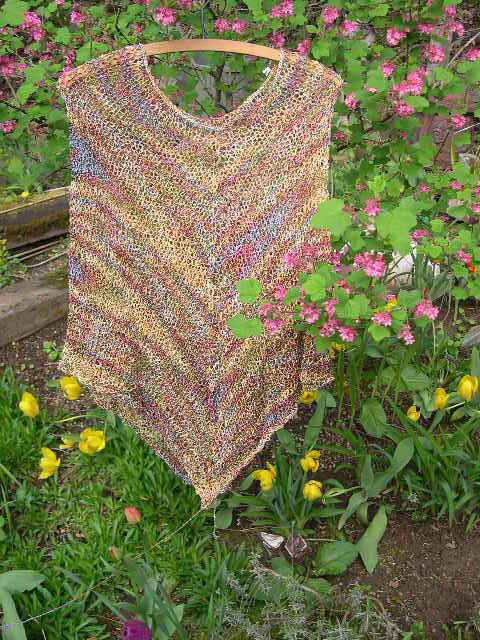 Oh yeah, pau. But even though my gauge was right on, the poncho was about four sizes too small for her. She ended up giving it to her sister. I cried (in private). I don’t think younger sister ever wore it either. It probably ended up in a Goodwill bin of doom.