So. You thought the excitement was pau, yeah?  Not.

I had a dentist appointment yesterday; I have a fantastic dentist, but because I never had Novocaine when I was a kid (don’t ask me why), getting dental work done isn’t easy for me. But it had to be done, so I went out to my car.  Oops.  Flat tiyah. So I had to borrow Nolemana’s car and he said he’d call AAA while I was gone.  Sounds, fine, yeah?

So pau da dentist (he was so gentle, but still kinda ack da appointment) I called Nolemana; he said the AAA guy was just leaving and my spare was on the car.  Good, yeah?  Not.

When I got home, Nolemana showed me what had happened: when the guy was jacking up my front wheel, his jack slipped and wen hamajang my car.  Lidis:

I was not happy. And the kid had left without giving us a receipt showing that he’d damaged the car.  So I insisted that he come back and do that. No mess with dis tita!  He did, and also took photos to show his manager. Then I headed down to Les Schwab Tires to get my tire fixed.

The Assistant Manager called me back (I’d left a message) and said that the Manager Manager isn’t due back till Saturday, and promised that they’d get it taken care of. In the meantime, the Les Schwab guys got my tire fixed.  It took two of them to put the spare back in place because it’s so hard to get to.  Love these guys; they work fast and efficiently, and I was out of there in less than an hour. 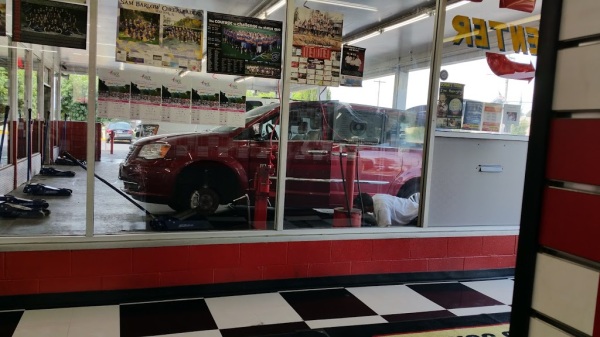 This is what they found in my tire: I’m glad I didn’t need a new tire!

So today I went to our auto body shop, one we’ve used for years. And yeah, I will be the one deciding where my kawila gets fixed. Guess what the estimate was to fix my car?  Go on, try guess!

6 Responses to …and the beat goes on….