Today is a sad day for me after all the excitement of Tour de Fleece. One of our two Jacob sheep hasn’t been doing well; for the past two days he’s gotten himself all tangled up in blackberry thickets and wouldn’t come out.  Our angel helpers, Danny and Joan, along with Nolemana, had to take clippers and clip away the thorny branches from around him. Now I wonder if Paul knew his time had come and was trying to find a hiding place.

Sorry for the blurry photo, but it was dusk and I was ‘way up on da lānai.  This is when Joan and Nolemana got him out of the thicket the first time.

The next afternoon, Danny hiked all the way up to that same thicket, but couldn’t find him.

Paul wasn’t there, but after searching, Danny found him totally tangled up even more worse than the night before.  Blackberry vines were in his fleece, his head, his legs. Danny cut everything away and led Paul to the barn.

My plan was to get Paul sheared so that he wouldn’t get his fleece stuck in the blackberries, but he was looking so bad that I called the vet instead. She came out today, and said that the kindest thing to do would be to put him down, so that’s what we did.

It’s always so hard to lose our animal friends.  Nolemana and I had driven up to Bellingham, Washington, and had brought him and Titus home as lambs in 2002.  The average lifespan of a sheep is 10-12 years, and it helps to know that Paul had a long and happy life here.

Paul thought he was a llama for awhile; he loved hanging out with Rayado, our llama with the same coloring as him. 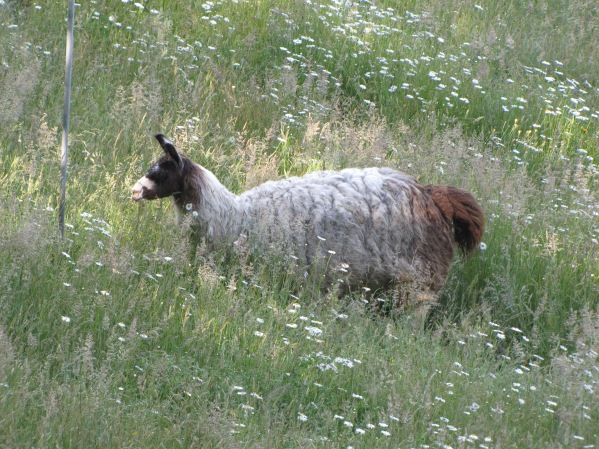 Aloha ʻoe e Paul…you’ve been a wonderful addition to our farm and I’m gonna miss you.